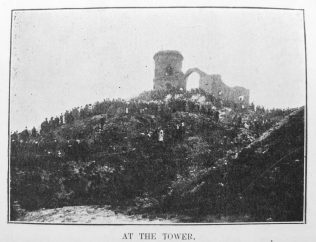 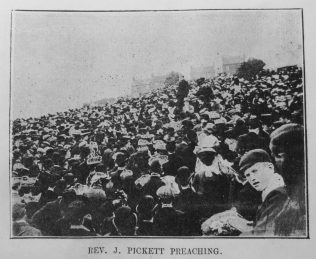 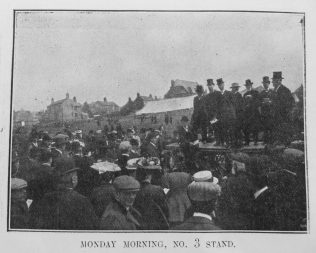 Transcription of Article in the Primitive Methodist Magazine by Rev. Thomas Graham

Mow Cop was wonderful. The coming of the people was wonderful. Wonderful were the spirit of praise and the passion of evangelism everywhere manifested during those three memorable days. And as coming years undoubtedly will show, wonderful was the penetration, vitality and permanence of the new baptism that fell upon the church at its Centennial Thanksgiving.

When contingents from the great ports on the east and the west met soon after dawn on Sunday morning under the walls of the castle and sang, “All hail the power of Jesus’ name,” they foreshadowed a religious gathering that for numbers, motive, and enthusiasm has been scarcely paralleled in history. The lowest estimate of impartial experts placed the attendance on the Sunday at eighty thousand. And Monday brought large contingents from all parts of the land. In many cases the wonderful day was sandwiched between two nights in a tedious excursion train.

Miners from Durham and Glamorgan, and farmers from Cumberland and the southern counties toiled and sweated together in the climb up the picturesque Cheshire lane to the head of Mow. Even the most moderate estimate of attendance made before the event was issued with some trepidation, for besides the one hundred and fifty or so who would be on duty in various capacities, who could say how many would be present, or where the people would come from? Without pressure, but in free response to the church’s call the people came, and every fresh contingent was a new surprise. The spontaneity of the gathering was as remarkable as its spirit.

The people came together in the spirit of religious devotion. It was a joyous pilgrimage, a gathering of the tribes on Mount Zion.

Young people were dazzled by the numbers and the changing scenes in the field and rocky heights. The men and women of middle life, who were more deeply steeped in connexional tradition, and who more fully understood what they and their homes owed to this church, often betrayed an emotion too deep for words. The eye flashed with religious fire, and a low, fervent, “Praise the Lord” would accompany the grip of greeting with friends, both indicative of the delight and awe of standing on the holy hill of Mow Cop, on which the eyes of the churches had rested with longing for a year past, as the gaze of ancient Israel turned to Jerusalem, the city of their fathers. And Mow Cop did not disappoint the expectations born of religious imagination. Its eleligious imagination. Its elevation and isolation quickened the sense of the unseen, and prepared the mind for ineffaceable impressions from the spiritual world. It might have been a new Sinai; certainly the church had a new call, entered into a new covenant, and was baptised in the Shekinah, the glory-cloud, for a new mission and larger prosperity.

Those privileged to witness the scenes during these three days on the mount can never forget them. From Saturday afternoon until Monday night singing, praying, and preaching proceeded almost without intermission.

One of the most memorable moments was that on Sunday morning when the bands marched in from neighbouring towns. Already the field was alive with happy people, their joy enhanced by the beauty of the natural surroundings and the brilliant sunshine which fell upon them. When, however, the processions came, dense masses of ardent Primitive Methodists appearing over the crest of the hill, greeting the ear with the familiar songs that have served as battle-cries and pans of victory in many a spiritual conflict, their demeanour and bearing eloquent of the strength and gladness that come of religious devotion, then one’s soul caught fire, and for a moment leapt up in uncontrollable flame.

The programme bore some striking resemblances to the proceedings at the first English camp meeting a century ago. The square half-mile of ground reserved for the celebration included the original site, four preaching stands were provided, and praying exercises had a prominent place at each service. In the excellent arrangements made only one thing seems to have been generally missed. That was the flag. The stands were sufficiently distant to obviate any mutual inconvenience, only the singing floated over, and that caused no trouble; on the other hand, sometimes a ringing tune from another camp stimulated both speaker and hearers at a neighbouring service. And what singing! How the multitudes revelled in the favourite hymns and tunes, especially those that have never lapsed from common use! It soon became pathetically evident that some of the earlier camp meeting songs were unknown to the present generation, and quite beyond public use, although still precious at the fireside in homes which retain unbroken links with the earliest days.

Every type of preacher seemed to be represented on the waggons, and it was gratifying that they all maintained such splendid form for the exacting duty of preaching to vast crowds on a mountain side. The message was the same as delivered throughout the century – a free, full, and present salvation. The old gospel, with the old fervour, and – thank God! – with the same assurance of the Holy Spirit.

The official programme, however, represented only a part of what took place. The crowds on Sunday were too large for all to hear at the stands. For this reason, but more probably to a greater extent to give vent to the surging emotion within, impromptu meetings were held all over the hill.

By Sunday at noon Mow was like an anthill, simply alive with eager, happy Primitives, voicing their joy in song and testimony.

In the church on Sunday morning a service began itself, like the meetings in the Welsh revival, and continued without a moment’s pause until late at night. To many the lovefeasts were the most enjoyable feature of the great day.

The significance of Mow Cop can scarcely be overrated. It revealed to the nation a religious and social force whose strength had before been underestimated. It revealed to the church itself unsuspected moral and spiritual power, as the inauguration of the Thanksgiving Fund was shortly afterwards to reveal unsuspected wealth. The best thing the church has brought from Mow Cop is the pure consciousness of its evangelical origin. The point of departure for the new community was neither the first conference, the adoption of a name, the amalgamation of the revival movements in 1811, nor the formation of the first society; but the selection and adaptation of the camp meeting as a necessary and providential means of reaching the masses of the people in religious aggression. The church was born at Mow Cop, and the birth was that of a giant and a genius – a rare combination – whose strength and thought were destined to develop and help mould the coming century, entirely outliving with the advance of years the local friction and changing of sides incidental and inevitable in the inception of a new democratic movement. The minor phases of our origin have paled into their natural insignificance before the clear, intense realisation of our birthright of evangelism. We now have a ready answer for those who playfully confess they cannot tell which really is our birthday. We were born at Mow Cop, on May 31st, 1807, not of blood, nor of the will of man, but of the Spirit of God who graciously hovered over the nation in the early years of the nineteenth century and awakened a new religious passion, of which open-air evangelism was one of the most prominent manifestations.

Mow Cop revived the ideal and instinct of evangelism. But quite as conspicuous in the celebration were the intellectual and ethical aspects of religion. On the two week-evenings the church came down from the mount, first for the mass meeting at Hanley, to hear the denominational members of Parliament, ten of whom were announced to speak, and then for a magnificent gathering in the Jubilee church at Tunstall, when intellect, culture and wealth were as happily blended with evangelistic fervour as were social aspirations and political service on the Saturday.

There is more than the jingle of a rhyme in the association of Mow with Dow, and it is worth recording that the first name handed in by new converts at the Centenary camp meeting was that of a visitor from the United States. But the richest fruit of Mow Cop was not the immediate conversions, gratifying as they might be, but the reanimation of the old evangelistic fire. Writing after the event, it is possible to record that the anticipation has been realised and there burns in the breast of the church an afterglow that is warming the whole community. Mow Cop has revived open-air evangelism, and before the summer is through hundreds of villages and towns will have had their own smaller edition of the glorious Centenary camp meeting in which all the churches have rejoiced with us and the whole nation has noted, thanks to an attention from the press on a scale never seen before.