Our Centenary - Memories of Mow Cop 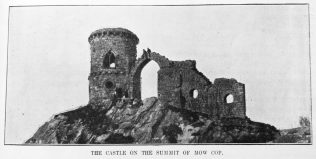 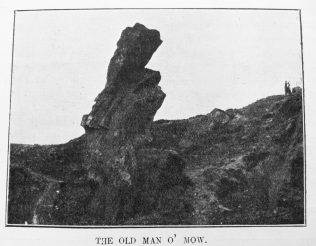 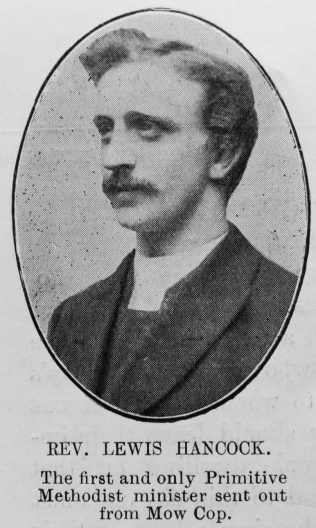 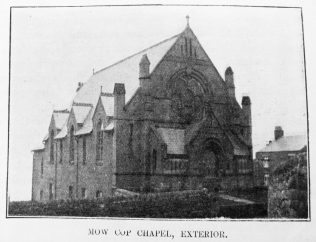 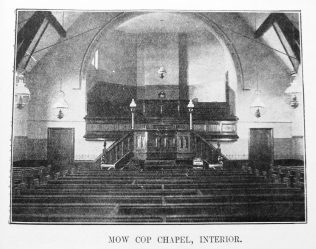 Transcription of Article in the Primitive Methodist Magazine by Rev. Lewis Hancock

Mow Cop, as every loyal Primitive Methodist knows, is the classic ground of Primitive Methodism. Here, a century ago, those godly enthusiasts, who desired ‘‘a day’s praying,” gathered to worship God. It was inevitable that they should leave their impress upon the people dwelling on that rugged eminence, and to this day one must go there and know the simple lives of their descendants to correctly interpret the spirit and passion of Bourne, Clowes, and their early adherents. The natural conditions largely contributed to the moulding of the cast in which Primitive Methodism was originally shaped. The rugged solitude, magnificent scenery, and exaltation into the clouds all made for the impression and realisation of the nearness of a Divine Power wonderful in His Works and great in His Love to men.

Born amidst such surroundings, the early Methodists who inhabited Mow Cop were natural in their worship and devoid of any suspicion of the artificial or formal. Their worship was as rugged, breezy, and sincere as their natural surroundings, and to this day that original spirit of freedom in expression and originality in religious worship prevails among their descendants.

Many of the second generation of Primitive Methodists are now “gone Home;” but with some of them I was privileged to worship from my youth, and it is of these I desire to write. Ten old men and women were wont to meet every Sunday morning in the little vestry to hold their class meeting. Some of them could well remember the days of their childhood, when Hugh Bourne formed and led that class. They were truly a band of original Primitive Methodists. Their leader, William Hulme, was an aged brother who oft-times talked with Paul until one started almost with a shiver of fear, as if the Great Apostle were actually and truly present. What feelings of immeasurable rapture thrilled the souls of all the members on these occasions! The very silence of bowed heads and outstretched hands was eloquent, and one felt truly that the Lord was present touching the spirits and emotions of every individual. Then came a great outburst of pent-up soul-feeling, and all spake as the Holy Spirit gave them utterance, so freely, so, naturally, and so deep with earnest conviction that all doubts and fears receded, and God and Christ and heaven came so fully and really into the midst that no man could ever go out into the world from that meeting and doubt again.

In the public services these followers of Jesus gave vent to their feelings with loud but earnest “Amens!” and “Hallelujahs!” and the Word became quick and powerful, so that sin-stricken souls cried out in their agony, and with tears and faith found the forgiveness of their sins. The singing was not left to a choir – it was congregational, and the congregation felt no qualms of conscience in “repeating.” Many times have I joined them in this transgression, as some soul-inspired father has called for “A-nuther.” They knew how to sing such old hymns as:
“My soul’s full of glory, which inspires my tongue;
Could I meet with an angel I’d sing him a song.”

I have been privileged to hear many famous singers and choirs, and many crowds of camp meeting worshippers sing the praises of God, but nowhere have I felt so deeply the under-current of great religious conviction and profound spiritual power, as when, in untutored tones, the children of early

Primitive Methodism rose up to sing the music that God Himself breathed into their souls. It was soul – not voice – expression. They sang what they felt and knew and realised in their own personal relationships with God. I have oft-times wished most sincerely that a congregation would pause in their praise and catch an echo from Mow Hill of that music! Music which was not a testimony to the care spent upon voice-production and expression, as many now interpret these terms, but which had in it, nevertheless, the grandeur of souls striving passionately to find expression for the great joy and praise swelling up within them. Many a soul has been sung to Christ on Mow Hill, and many more will thus be led to Him in the Great Centenary services.

From among these dwellers on that rugged summit there have come some of the grandest of God’s natural preachers. Their theology they based on their own personal experience. Theories they discounted. God and Nature they knew; and what they knewthey declared to the people. The definiteness of their preaching always struck me forcibly. One listened, and forgot to say, “This man lacks culture, style, and logic,” because there was forced upon the heart this conviction, “This man speaks what he knows and feels to be true.” Their style was natural – as every true and successful preacher’s style must be; their logic was the sound logic of what their lives taught them was true, and their culture was that of hearts steeped in close and constant communion with that Christ of whom they spoke. Who can wonder that their preaching sent home an arrow of conviction to the heart of the sinner and brought him to his knees in repentance and fear? Yes, I say “Fear,” for in the freedom and ruggedness of their country home they learnt to speak pointedly, and never hesitated to plainly declare God’s wrath against evil-doers. His mercy they preached, but never shunned the duty of also declaring His justice. So forcibly did they bring home to their hearers the awfulness of sin, that I have seen men drop in their seats, while others trembled with an awful sense of their lost condition, Oh! for such sermons in these suave days, to shake the very foundations of the lives of many who placidly go on unmoved and self-confident!

The old men, and women, too, visited the homes, and brought round, from house to house, their cottage prayer-meetings. Many a mother and family, unable to seize the privilege of attendance at meetings during the week, have been richly blessed and helped by these meetings. Along the dark and rough roads, the fathers, leaning heavily on their thick sticks (often cut from the trees or hedges), would journey to the appointed rendezvous, and while, round the rocks and along the ridges of the hill, the wild winter winds shrieked and howled, they sang and prayed until God was heard speaking even in the wind. I remember their pastoral visits. Two by two they called here and there to see Brother So-and-So or Sister Somebody, and what rich blessing they carried into the home. Their tone was spiritual. No chatter was ever heard of gossip or cant. No one ever expected that. What somebody had said, or done, or seen was no concern of theirs. They talked of God and His Providence and Love. They spoke of grace for the time of need, of comfort for sorrow, of Divine help and guidance for the day’s perplexity and burden, until all seemed changed, and one’s home was different when they departed, for God had come in with their coming. “Old Sammy” would pray, and as grew warmer and warmer in holy petition his long curls shook and his voice rang out clearer and clearer. No one could ever forget “Sammy,” and so could never forget his prayer. It seemed reiterated a thousand times, and answering help from on high could never be denied.

The mystical element was prominent in all these grand old ancestors of ours. Some might question the declarations of such a man as Thomas Lawton; and yet who shall say the day of visions from God to His children is past? And when his messages were actually coming to be fulfilled from time to time, who shall declare Him to be a mistaken dreamer? He has often described to the writer how he lay awake in his bed in the stillness of midnight and heard the music of heaven borne in upon him until his raptured soul cried out with great joy and gladness. More than once has he been privileged to warn men to flee from their sins ere death overtook them, and more than once has the angel he saw speedily visited the one warned to call the soul to stand before God. The mystical is an essential element of the deeply spiritual and religious, and these men were deeply spiritual in heart and in life. Let him scoff who may; God’s revelations come to those who are ready to receive them.

The camp meetings and open-air services on Mow Hill have always demonstrated the fact that no people possess the genius for this kind of Christian work as do the true Primitive Methodists. The Divine power and unction prevalent in these services has always been to the writer a source of great wonder and joy. From 6 a.m. until night-time the fire is kept burning brightly, and in the meetings for prayer and the services in the open-air God’s presence is manifest. Who, having been privileged for years to rise at 5 o’clock on the Annual Camp Meeting Sunday, can ever forget the tense feeling of spiritual power and rapture, when, having climbed right to the top of the hill, one has found assembled there a company of twenty to forty men and women all kneeling under the skies praying God’s help and blessing in the services of the day? And later, in the morning and afternoon, as crowds from all parts of the district, from Crewe, Sandbach, Talke, Kidsgrove, Congleton, Macclesfield, Bradley Green, and the great throbbing Pottery towns have come together to hear the Word of God, – What a scene it is! The rugged hill, surmounted by the Castle, the preacher, with his face turned towards an expanse of magnificent plain, stretching away for forty miles to the Welsh hills, the heart-felt responses, the earnest prayers, the singing of the old hymns, all combine to form a memory never to be forgotten.

And at night time the old-fashioned lovefeast in the chapel, which is packed in every part, is a meeting such as one rarely can find elsewhere. The testimonies, original, sincere, and striking, the fellowship of hearts, the overwhelming presence and power of the Divine, and the cries of souls seeking Jesus, all leave their mark upon one, and cause one to pray that long such experiences may come from God to men.

Since the early days the people of Mow Cop have joined in the great march of progress and development. The present chapel, the third we have built at Mow Cop, is a beautiful and well-arranged sanctuary, but the services are no less hearty and spiritual in tone. The children of the Early Fathers cherish and possess, their spirit. They have carried with them in their progressive march the very atmosphere in which they were cradled and reared, and so long as Mow Cop stands, and its people meet to worship the God of their fathers, the true spirit and passion of Primitive Methodism will not be dead. Many who join in the Great Centenary Meetings on Mow Hill will know what is the genius of our connexion’s work more really than they have ever known it before, and an incalculable benefit will accrue to Primitive Methodism if its adherents carry back to all the churches some measure of the spirit of evangelism and earnest fervour which will be found to prevail during the Centenary Celebrations on Mow Hill.