You are here: HomenextTopicsnextPrimitive Methodist HistorynextLorenzo Dow: The Founder of American Camp Meetings 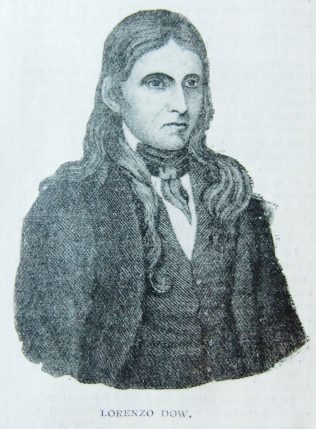 The Christian Messenger 1900 published a detailed biography of Lorenzo Dow written by Rev. Albert A. Birchenough.

The biography was serialised in eleven chapters; a transcription of each chapter is attached as a pdf document below.

The chapters are as follows.

This chapter introduces the family of Lorenzo Dow, his early life and his path to conversion.

Lorenzo felt a call to preach over several years and became a successful evangelist. After many struggles he was accepted by the American Methodist Conference as a travelling preacher, but they were not sure how to use him as a minister. Nevertheless he is successful in adding 180 persons to church membership. He applies to conference to go to Ireland but is refused permission. However he decides to go, via Montreal and Quebec, before he can be ordained.

Lorenzo is placed in circuit, but finds a lot of opposition from his congregations.

Dow spends some sixteen months in Ireland having success, but much opposition. He suffers from a serious bout of smallpox, and is nursed through it by a Quaker doctor.

Chapter 5: Sowing beside all Waters

Dow is reinstated as a probationary minister and allocated a circuit on his return from Ireland. However, he soon decides to travel independently across North America. He has many adventures including an escape from an Indian raiding party.

Lorenzo continues his travels in America and gets married at the age of 27.

The history and organisation of American Camp-meeting is described. Dow’s experience at several camp-meetings is recorded, including the unusual phenomenon of ‘jerking’.

Lorenzo visited England and Ireland arriving in late 1805 and returning to America in early may 1807, just before the first Mow Cop Camp-meeting. His visit to England did not receive universal approval.

The chapter describes the preparations for the first English Camp-meeting and the subsequent resolutions made at the 1807 Wesleyan Conference, held in Liverpool.

Dow makes a second visit to England in 1818.

The author reflects on Dow’s theology and the breadth of his literary contribution.

Chapter 10: The Evening of Life

Dow returns to England in 1818 and tours Lancashire, Cheshire and the East Midlands. Preaches the opening sermon at Bingham, the first Chapel erected by Primitive Methodists in Nottinghamshire.

He returns to America where he becomes increasingly eccentric and drifts away from Methodism. His first wife dies in 1820 and he soon re-marries. Dow dies on 7 February 1834 whilst on a journey to Washington.

The concluding chapter provides physical descriptions of Dow, and some impressions of his character from third parties. It concludes with a number of annecdotes that illustrate his eccentricity.

The author concludes; ‘Lorenzo Dow’s fanciful style of dress, along with his extraordinary appearance, his eccentric doings, and his extravagant speech, were the means of awakening the attention of the slumbering multitudes. They were the means of bringing thousands of people to attend his ministry. His shrewdness and discernment of character gave him great influence over the vast numbers that listened to his life-giving words. He helped thousands of earnest seekers after divine things to cross the threshold of the kingdom of God. As a glori?ed soul-seeker and soul-winner, he takes his place with those that shall shine for ever.’