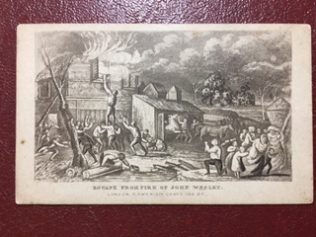 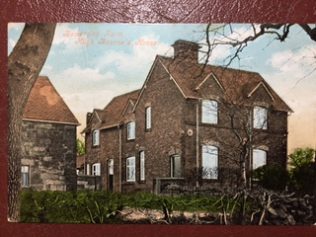 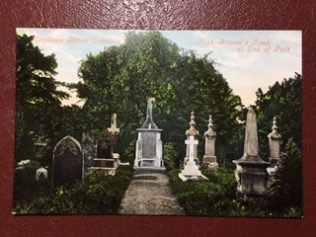 The Wesleyan Methodists had during the latter part of the nineteenth century (before postcards were available) developed and produced a series of Carte de Visites (CDVs) which depicted the ‘famous’ scenes of Methodism. These were usually the engravings that had been used to illustrate books, or works of art, perhaps the most famous is Henry Perlee Parker’s painting ‘the Rescue of Wesley from the burning rectory” (see illustration). What they did was provide an easy access into the story of the denomination. Some engravings are far less well known today, such as Rev J Wesley preaching at funeral of Rev. George Whitfield, but together they were a denominational compilation of their story. Many of these were at the end of the century used as magic lantern slides, produced for Wesleyan Sunday schools,

Primitive Methodism did not generally share in this iconography in the same way, until the Centenary celebrations. The Centenary book “The Romance of Primitive Methodism” by Rev. J Ritson  did not include engravings,  as many of the Wesleyan publications around the 1891 centenary of the death of John Wesley had. But the 1907-1910 Centenary gave the opportunity to issue pictures of significant scenes or things. So for example the handbook for the 1910 Tunstall conference together with the associated Mow Cop Camp meeting, carried a full page advertisement for Centenary Publications, one item of which was “Souvenir cards, Centenary picture post cards, Centenary medals, services of song, dialogues etc.” It was these picture postcards that provided the popular contemporary iconography.

It is probable that postcards of the 1907 Camp meeting were also sold at this date, together with portraits of Thomas Bateman and a Centenary Souvenir card ‘Hitherto hath the Lord helped us,’ the latter also issued as a poster for church use, and still displayed in some former Primitive Methodist chapels.

Strikingly these were apparently photographs of the scene as it was, contrasting with the neat discreet engravings used by the Wesleyans.