You are here: HomenextTopicsnextTemperancenextIndependent Order of Rechabites

'We will drink no wine or strong drink' 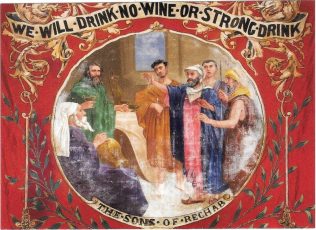 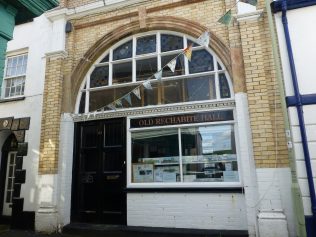 Whilst strolling around the North Devon town of Appledore, I noticed a building at 21 Market Street called the Old Rechabite Hall, reminding me of a card I had bought while visiting Englesea Brook. The card depicts The Sons of Rechab, with a banner ‘We will drink no wine or strong drink’.

In the window of the Old Rechabite Hall was a display, describing the history of the building, information about the biblical Rechabites and their more modern day counterparts.

I am grateful to the author of this information, which I have used as the basis for this page.

The building at 21 Market Street was recorded as an inn in 1747, probably called The Swan. It was sold in 1908 to the Independent Order of Rechabites, a Friendly Society which took its name from the biblical Rechabites. They were the descendants of Rechab, through Jonadab, who forbade the clan to drink wine, and commanded them to lead a nomadic life. Their story is told in the Book of Jeremiah 35:6

“..We will drink no wine, for Jonadab the son of Rechab, our father, commanded us, saying ‘You shall drink no wine, you nor your sons, forever. You shall not build a house, sow seed, plant a vineyard, nor have any of these; but all your days you shall dwell in tents, that you may live many days in the land where you are sojourners’ “

The Independent Order of Rechabites dates from 1835, one of a number of Friendly Societies set up from the late 18th century to provide working class people with health insurance and death benefit. The founders were a group of Manchester Methodists, and one of the founding principles was total abstinence from alcohol for all members.

Each Lodge or branch of The Order was known as a Tent, reflecting the nomadic status of the biblical Rechabites.The titles and structure were modelled along biblical and tribal lines, and rituals tended to follow those of Freemasonry, with which many of the founders were familiar.

Each Tent was ruled by a High Chief Ruler, assisted by a High Deputy Ruler, Corresponding Secretary, Side and Tent Stewards, Inside and Outside Guardians, a ‘Levite’ of the Tent, and a number of Elders. Each official had his own insignia, and had his own place and role in the meeting of The Tent, particularly in ceremonies surrounding the induction of new members.

Membership was open to all, but before joining and benefiting from the insurance and saving schemes, a document known as The Pledge had to be signed, to swear that the proposed member and his family would abstain totally from alcohol.

The initials IOR on a gravestone indicates that the deceased was a member of the organisation.

In 1999 the Society, by now known as the Rechabite Friendly Society centralised its various groups and regions into a Manchester Head Office. In 2004, the Society was renamed Healthy Investment, and opened its membership to those who enjoy alcohol in moderation.

Today it is a modern financial services organisation committed to providing ethical savings and investment products, with more than 100,000 members. It avoids direct investment in companies in the alcohol, arms, tobacco, gambling and pornography industries.