You are here: HomenextTopicsnextTemperancenextQuilt presented for support for temperance cause

Quilt presented for support for temperance cause 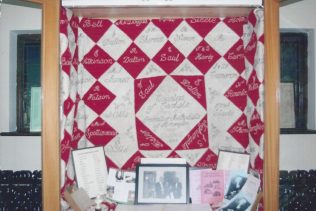 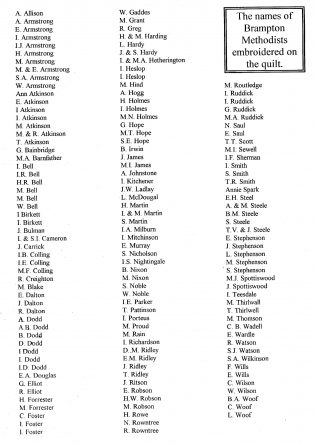 zoom
The names of Brampton Methodists enbroidered on the quilt

This quilt was presented to Rosalind, Countess of Carlisle, in 1890 in recognition of her support for the temperance cause in and around Brampton.

She was a tireless campaigner for temperance to the extent that she had printed on to the employees’ wage packet a declaration, to be signed each week, that they would abstain from alcoholic liquor of any kind. Whilst the Countess’s motives were for the best, she became notorious for the adherence to this principle.

Brampton was noted, in the earliest years of the 20th century, for the number of inns, taverns, bars and ‘selling-out’ shops it had. For a population of about 2,500, it had no fewer than 45 licensed premises. That equates to one outlet for every 45 inhabitants (men, women and children) of the town! Rosalind made it her calling to buy as many licenses as possible when they came up for renewal, and she managed, over a long period, to bring the number down to seven! She was helped in this quest by the fact that her husband was the chairman of the Bench!

The quilt is now displayed in the Crush Hall of the present Methodist Church. There are many names on the quilt.