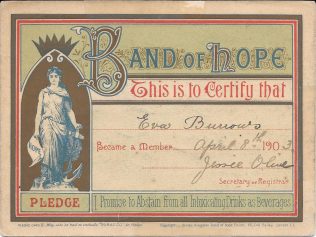 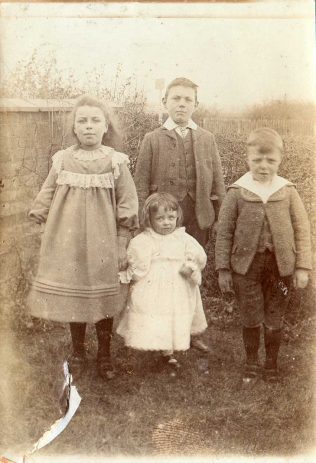 The Band of Hope Union was founded in 1855, during an era when excessive drinking amongst adults was common, adding to the problems of poor living conditions and health, and maltreatment of children and child mortality. Alcohol was freely available to youngsters.

It was an organisation for children under 16, with the aim of preventing them from starting to drink alcohol, but it also functioned as a children’s club, embracing all sorts of activities.

Great Aunt Eva Burrows was born in December 1896, the year before Queen Victoria became Patron of the Band of Hope. As Eva’s card shows, she became a member in 1903 at the age of 6. At that time there were over three and a quarter million members in the UK. In Eva’s small village of Cosby, near Leicester, chapel records note that there were 56 juvenile abstainers under 14.

In 1995, the Band of Hope changed its name to Hope UK, and is a national charity providing drug and alcohol education for children and young people, parents and youth workers.

Follow this link to see a photo of Eva, aged about 17. Jill Barber noticed that she is wearing the white ribbon emblem of the British Women’s Temperance Association. Founded in 1876, this organisation still exists as the Women’s Total Abstinence Union Ltd. Its aim is to provide education on the effects of drugs, alcohol, smoking and gambling.