You are here: HomenextTopicsnextWomennextSisters of the People

Sisters of the People 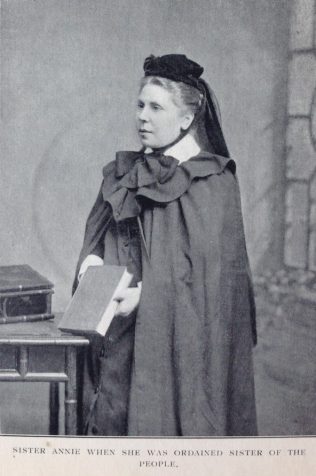 zoom
Sister Annie when she was ordained Sister of the People

The Start of the Order

In 1893, when J Tolefree Parr came to Surrey Chapel, the Central Mission in Blackfriars Road, in south east London, there was no Order of lay women, like the Wesleyan Deaconess movement,  in the Primitive Methodist Church, although Thomas Jackson had ‘Bible Women’ (from the ‘Domestic Mission’) assisting him in his work at Clapton.

However, the West London Wesleyan Mission, under Hugh Price Hughes, had started a Sisterhood, and the reports of their work convinced Tolefree Parr that this was what they needed at Blackfriars.

To raise the money to pay the salary of a Sister, he wrote to 25 friends and asked each of them to give him £1 towards the first year’s salary. The salary was to be £50 a year, but he believed that when the Sister started, and people could see what she was doing, the other half would be raised without difficulty.

The first Sister of the People

The most important question was “Where shall we find the Sister?”  The Samaritan Committee met and unanimously decided to ask Emma Davis, one of the Sunday School teachers, to become their first Sister of the People.  She was concerned that she was not well-educated, and had not had any training, but she had felt called by God since childhood to this kind of work, but it had seemed impossible until now.

Two weeks later, ‘at a Public Ordination Service, she was solemnly dedicated to the work of the Sisterhood, taking the name “Sister Annie”, the Christian name of her old Sunday School teacher. As she knelt at the Communion rail in her simple and becoming Sister’s costume, I prayed Almighty God to grant her strength, wisdom and grace for her great call.’

Her role was to serve the poor in the area around the Surrey Chapel, which was unrivalled in the whole of London for crime, poverty and overcrowding. 68% were living below the poverty line. Families were living in one room, in one case 19 people in a single room. The houses were nearly all let out in tenements, each family living in one room. She visited the sick, laid out the dead, fed the starving, brought fuel for the freezing, battled against the evils of drink, and told people that Jesus loved them. Many had never heard of him.

‘She made short shrift with those Christians who do not realise that their first duty to starving men or women is to feed them, and afterwards preach to them the Gospel.’

The difference she made led to other Sisters of the People being appointed to serve in the very poorest areas of greatest need of hope and light.