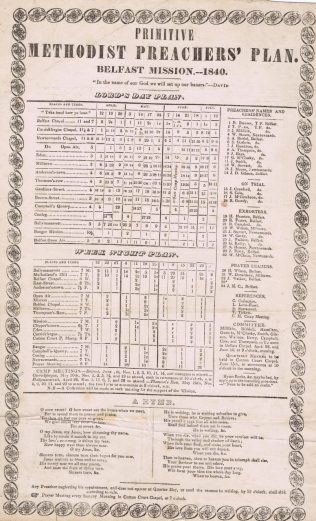 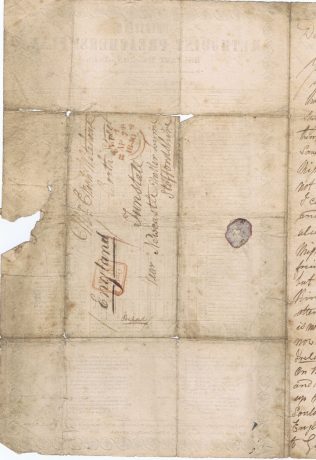 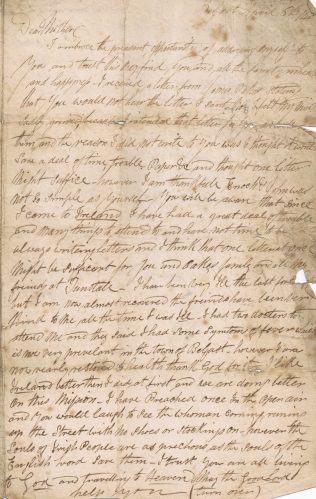 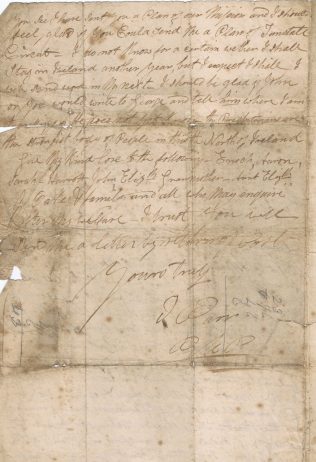 Letter on back of Belfast Mission Preaching Plan,  1840

This plan is unusual, as the letter on the back shows it was sent by post from Belfast by Thomas Parr, shown on the plan as the second Primitive Methodist minister, to his mother in Tunstall.  The spelling in this transcript has been standardised.

I embrace the present opportunity of addressing myself to you, and trust this may find you and al the family in health and happiness. I received a letter from James Oakes stating that you would not hear the letter I sent. Now I felt myself sadly grieved, because I intended that letter for you as well as him, and the reason I did not write to you was I thought it would save a deal of time, trouble, paper etc and thought one letter might suffice. However I am thankful Enoch & John was not so simple as yourself. You will be aware that since I came to Ireland I have had a great deal of trouble and many things to attend to and have not time to be always writing letters and I think that one letter at once might be sufficient for you and Oakes family and all the friends at Tunstall.

I have been very ill the last fortnight but I am now almost recovered the friends have been very kind to me all the time I was ill. I had two doctors to attend me and they said I had some symptoms of fever which is very prevalent in the town of Belfast. However I am now nearly restored to health thank Go for it. I like Ireland better than I did at first and we are doing better on this Mission. I have preached once in the open air and you would laugh to see the women coming running up the street with no shoes or stockings on. However the souls of Irish people are as precious as the souls of the English Lord save them. I trust you are all living to God and travelling to Heaven. May the good Lord help you.

You see I have sent you a Plan of our Mission and I should feel glad if you could send me a Plan of Tunstall Circuit. I do not know for certain whether I shall stay in Ireland another year, but I expect I shall. I will send word in my next. I should be glad if John or you would write to George and tell him where I am travelling. He does not yet know the Presbyterians are the strongest body of people in this the North of Ireland.

Give my kind love to the following – Enoch, Aaron, Sarah, Harriet, John, Elizabeth, Grandmother, Aunt Elizabeth, J Oake & family and all who may enquire after my welfare. I trust you will send me a letter by return of post

Thomas Parr’s mother Mary married Enoch Whitehurst, a Potter, on 30 November 1834, in Wolstanton, after the death of her husband Thomas Parr.  Their marriage entry  shows that neither could write their names.  It is unlikely that Mary or Enoch could read, so his brother may have had to read this letter to them.  Thomas send his love to his brothers and sisters. Aaron (b1828), Sarah (b1821) and Harriet (b1826) were still living at home.  John (b1813) was married to Elizabeth.   By 1851, Enoch Whitehurst was a pauper in the workhouse, and Mary was living with Aaron and Sarah in Well St, Tunstall.