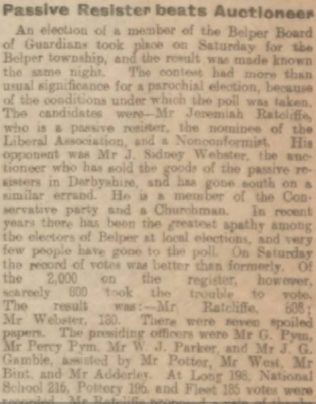 ‘An election of a member of the Belper Board of Guardians took place on Saturday for the Belper Township, and the result was made known the same night.  The contest had more than usual significance for a parochial election, because of the conditions under which the poll was taken.  The candidates were Mr Jeremiah Ratcliffe, who is a passive resister, the nominee of the Liberal Association, and a Nonconformist.  His opponent was Mr J Sidney Webster, the auctioneer who has sold the goods of the passive resisters in Derbyshire, and has gone south on a similar errand.  He is a member of the Conservative party and a Churchman.  In recent years there has been the greatest apathy among the electors of Belper at local elections, and very few people have gone to the poll.  On Saturday the record of votes was better than formerly.  Of the 2,000 on the register, however, scarcely 800 took the trouble to vote.  The result was: Mr Ratcliffe, 608; Mr Webster, 180.  There were seven spoiled papers.  The presiding officers were Mr G Pym, Mr Percy Pym, Mr W J Parker, and Mr J G Gamble, assisted by Mr Potter, Mr West, Mr Bint, and Mr Adderley. At Long 198, National School 216, Pottery 196, and Fleet 185 votes were recorded.  Mr Ratcliffe …’