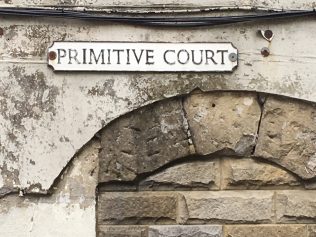 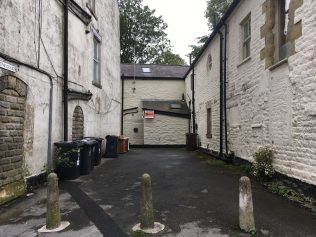 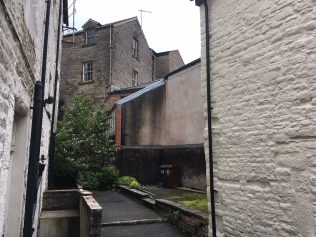 On a recent visit to Buxton, my wife and I spotted the street sign for Primitive Court. It is a small courtyard located off Terrace Road, at the north east corner of the Market Square. At the other end of the block that carries the sign  is the Buxton Museum, so I was optimistic they would know where the name comes from, but they didn’t.  Does anyone know the story?

The buildings around the Court are Nineteenth Century and earlier, and there is much evidence of change and adaptation through filling in of windows and doorways.  Ordnance Survey maps I can access from 1879 do not give any hints.

I asked Buxton Local History Society whether they could cast any light on the name and this is what they know:

AR:  In “The Book of Buxton”, John Leach gives a short but thorough summary of church and chapel sites in Buxton, including Primitive Methodist ones but this does not mention Primitive Court.  He does however write Primitive Methodists.. “missioned Buxton in 1820 but it was not until c 1840 that services were first recorded in a whitewashed cottage in Bath Road”.  It is therefore possible that meetings pre 1840 were held at Primitive Court, but no evidence for it.  I seem to remember hearing or reading (many years ago) that during the Second World War there was a temporary Jewish synagogue in Primitive Court but I have no firm evidence for that.

JA & JB:  My Grandfather and Father kept the building where the solicitors is as a newsagents, tobacconist and toy shop till 1970 and my mother owned that building for many years after that.  I never remember it having any name at all.  It was just a yard that gave access.  I don’t know of any Primitive Methodist connection either.   The buildings are really old and probably pre date Buxton House next door.  Terrace Road used to be called Yeomans Lane and we thought that they could be farm buildings.  I suspect Primitive Court was a name given when the buildings at the back were turned into 2 flats as it gave them an address.

JA & JB: Just found on Genuki website. A Primitive Methodist chapel in back lane was built before 1857.  This was replaced by a chapel built in the London Road in 1890. But don’t know where Back Lane was

RW:  Well by coincidence I am staying in Devon with John and Margaret Leach – John is the author of The Book of Buxton. Well he has racked his brains but said he didn’t come across any information about a chapel in this location. He says that in the early days the Methodists met where they could – usually someone’s front room, and moved about. The area behind Buxton House was a farm, and there would have been barns, which might have been used for meetings. The sign went up a few years ago I recall – presumably the owner of Buxton House had a reason for this, but John is currently unable to help.

Ernest Axon: paper XXII ‘Nonconformity’s Beginning in Buxton’ published in the Buxton Advertiser in 1947. In 6 parts: the section on the Primitive Methodists is in the last part which should be 24th May 1947 (but this will need to be double-checked).  Neither refers specifically to Primitive Court.

Then John Kingsland of the Buxton Local History Society got his teeth into the question and has written an excellent evidenced account of Primitive Methodism in Buxton. You can read John’s account here