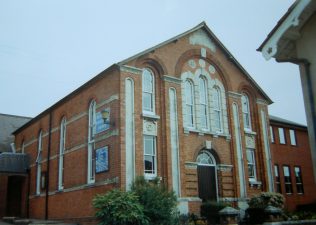 Blandford Forum Albert Street Primitive Methodist chapel was opened in 1877 in the new suburb east of the railway station.  The chapel seated 300; a Sunday school was added in 1894. That is recorded in the 1894 Primitive Methodist magazine – with the approving comment that, unusually, the mayor and mayoress attended the stone laying. Half the cost had been raised.

By the time of Keith Guyler’s picture it was in use by Blandford Evangelical church.  On Google Street View in April 2009 and on the Evangelical Church’s website, it is still in that use.

It is not clear when the Methodists moved out.