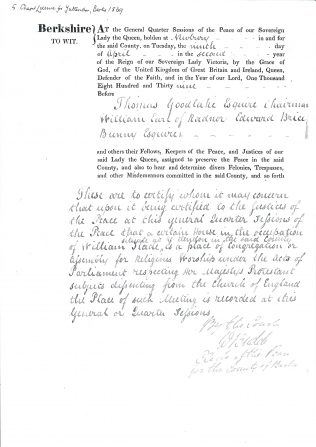 English law is a law of exceptions, and when it comes to the law relating to public worship the default position is that there is a state church, and so everyone is a member of it, and all places of worship belong to it – unless …

From The Toleration Act, 1689 onwards, “unless the congregation had registered their place of worship with the authorities.” , and from 1812 onwards a new Act stated that there had to be more than twenty worshippers before this was necessary. There was actually no compulsion for any local congregation to comply, but it was in their best interests, because being registered conferred legal protection. If a mob tried to shut down your chapel, for example, but you had registered it as a place of worship, then the ring leaders of the mob could be prosecuted.

“The authorities” varied, being either the Quarter Sessions, or the Diocesan and Archdeaconry Courts. Records of all chapels, or houses registered for Primitive Methodist worship are now found in The National Archives, if they have survived. An example from Berkshire is pictured. Note how the congregation are described. They qualify by being Protestant Dissenters: what sort of dissenter is of no interest to the authorities.

For a number of counties (Bedfordshire, Berkshire, Gloucestershire, Hampshire, Staffordshire and Wiltshire) transcriptions have been published. In 1829 the House of Commons requested that all counties and dioceses supply “Returns of the Number of Places of Worship, not of the Church of England, in each parish, distinguishing as far as possible of what Sect or Persuasion and the total number of each Sect”.  These returns are now only available in local record offices (as Quarter Sessions records), as when the House of Commons caught fire in 1834, so did many records. By 1851 there were 2871 chapels held by Primitive Methodist trusts (which would be eligible for registration) and a further 1662 preaching places.

Responsibility for registration of places of worship was passed to central government, in the form of the Registrar General in 1852. The Registrar General was supposed to produce a list of all buildings registered for public worship, but this seems not to have happened except in 1867. A copy of the 1867 list is still in Methodist Heritage hands.

Separate pages list the Primitive Methodist places of worship in 1867 by county.

Allowing for the fact that all these records (certificates of registration, 1829 returns, and the 1867 list) are incomplete for one reason or another, they are all of value in tracking the progress of Methodism. In many cases they tell us when a cause was large enough to acquire a permanent place of worship, or whose house was being used before a chapel was built. They complement the accounts of chapel opening to be found in the Primitive Methodist Magazine.

Registration continues, and whilst not compulsory it does provide certain financial benefits by granting exemption from business rates and the Council Tax. It is necessary for a building to be registered as a place of worship before it may be registered for marriages.  A full list of places of worship was published online in 2010 in response to a Freedom of Information Request, and updated lists now appear on the Gov.uk website.