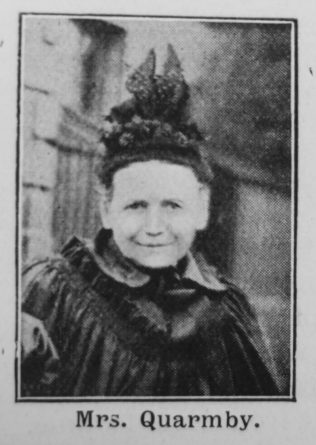 Transcription of Obituary In the Primitive Methodist Magazine by William Newns

Mrs. Quarmby, widow of the late Rev. John Quarmby, entered into rest early on Monday morning, November 12, 1900, aged 57 years. Her parents, who were of Welsh descent, came to reside at March Lane, in Nantwich circuit, many years ago. They at once joined the Primitive Methodist Church in this place, our late sister attending the services regularly. At an early age she was converted to God, and became a useful member of our society there. She was married to the Rev. J. Quarmby in the year 1864, to whom she was a helpmeet indeed. The excellence of her life and character may be seen from the fact that she succeeded in leading all her surviving children to Christ, and to join the church to which she belonged, the two elder sons being local preachers. Her kindness of heart and practical sympathy won for her many friends in the different circuits where they laboured.

On the death of her husband, about five years ago, she came to reside with her second son in Macclesfield, and joined the society at Newtown. Here she continued to labour till the end of her life, she being at the service “in her usual health on Sunday evening, November 11th. After returning home and retiring to rest she was suddenly taken ill and expired in about half an hour in the presence of two of her sons. Her remains were taken in the Primitive Methodist Church at Newtown, where an impressive service was held previous to the interment in Macclesfield cemetery. The writer conducted a memorial service in Newtown Church on Sunday evening, December 2nd, when there was a very large congregation, many friends coming from Bollington, one of the last circuits on which Mr. Quarmby laboured. “Blessed are the dead which die in the Lord.”

Emily was born at Perthfaen, Shropshire. She was baptised on 2 July 1843 at Llanymynech, Shropshire. Her parents were John and Sarah. In 1851 John was an agent for a stone quarry.

Emily married John Quarmby (1834-1895) in late 864 at Nantwich, Cheshire. John’s obituary recorded that they had ten children, five of whom survived him.