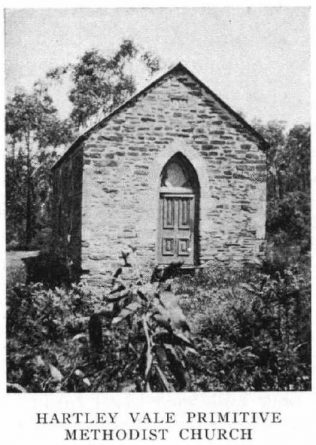 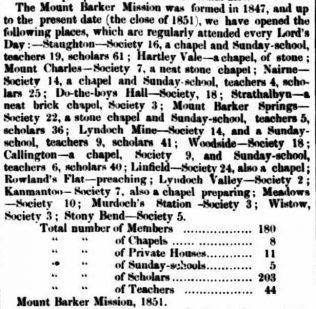 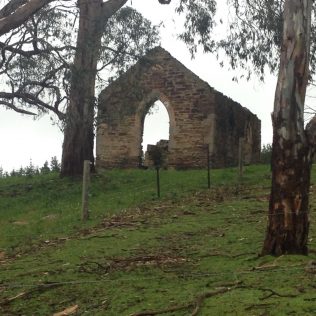 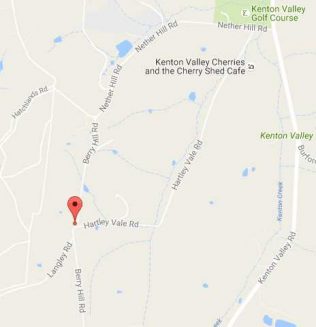 Extract from the centenary history of the Gumeracha district 1839-1939.

“This Primitive Methodist Church was built in the very early days, presumably between 1844-47. There are no records available showing the exact date, and the only information discernible on the building is the lettering “P.M.” Those responsible for its establishment were the Kellys, Moores, Teakles, Sandercocks, Hannafords, Lillecrapps and other settlers whose names cannot now be called to mind. The churchyard cemetery contains only one headstone, and this bears the name of a Mrs. Squires. The Church formed a portion of the Woodside circuit until the Methodist and the Primitive Methodist and Bible Christian Churches combined.

In 1855 the Church property was taken over by the South Australian Education Department, and used as a school, the first teacher being Mr. Ambrose.”

… “The old church building, now the property of the Moores, of Hartley Vale, who use it as a barn, is still in a fair state of preservation …”.

A report on the Primitive Methodists in the South Australian Register on 6 January 1852 noted that Hartley Vale had a stone chapel and was part of the Mount Barker Mission which had been formed in 1847.

According to the Gumeracha centenary history 1839-1939, it ceased to be a PM chapel in 1855 though it is still referred to as a PM chapel in a report on 4 November in the South Australian Advertiser regarding a temperance meeting held there on 26 October 1858.

Again, on 23 April 1859, the Adelaide Observer, reported the celebrations of the Sunday School anniversary and that the minister, Mr. J. Standrin, had preached to large congregations. “The children were regaled with cake and tea, after which they withdrew to Mr. Moor’s paddock, where they appeared to enjoy themselves at various innocent games.” The Sunday School anniversary the following year was in the news again on 20 April – the preacher this time being Mr. J.G. Wright from Adelaide. “In the morning the chapel was crowded. In the afternoon, as the walls of the sanctuary were too strait for the people, Mr. Wright preached in the open air to the largest assembly ever witnessed in the neighbourhood.”

The building was mostly destroyed during the Ash Wednesday fires in 1983. Only parts of the walls now remain. The remnants are on private property in a paddock enclosed by an electric fence. The “P.M.” above the door is still clearly visible from the road.