You are here: HomenextPlacesnextGloucestershirenextBristol and Primitive Methodism 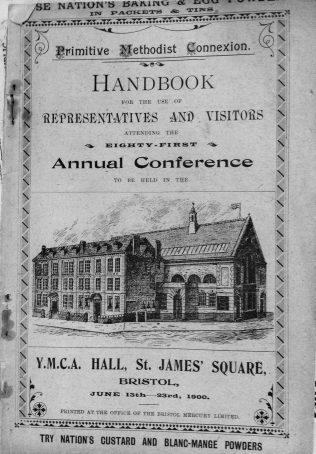 The history of Methodism in Bristol is full of interest.  That flaming evangelist, Rev George Whitfield, having been excluded from the pulpits of the Church both in London and Bristol on February 17th, 1739, preached for the first time in the open air, to two hundred colliers at Kingswood.  So successful was the attempt that it was repeated, and in March it was estimated that not fewer than 20,000 persons gathered round him at Rose Green, to whom he preached for nearly an hour and a half.  Being desirous of trying the experiment elsewhere, he resolved to go to Georgia, where he had  founded an orphanage, he wished Wesley to be his successor in the glorious work.

On Saturday 31st March Wesley came and on the following Sabbath evening began expounding our Lord’[s Sermon on the Mount, to a little society which was accustomed to meet once or twice a week in Nicholas Street.  The day after he spoke to about 3,000 people in the open air.

On Wednesday April 4th “three women agreed to meet together weekly to confess their faults one to another and pray one for another that they may be healed.  At eight four young men agreed to meet for the same purpose.” Here is the germ of the Methodist Class Meeting.

On Wednesday 9th May a piece of land was secured in the Horsefair, and on the 12th the first stone was laid of

THE FIRST METHODIST CHAPEL IN THE WORLD

It is now occupied by the Welsh Calvinistic Methodists and adjoins the Arcade in Broadmead.  Here originated the division of societies into classes and the payment of weekly class pence.

Wesley frequently visited Bristol and presided over the forty-seventh Conference in 1790, the year before his death.

Primitive Methodism was introduced into the city in 1833, “the zealous, laborious brethren,” Samuel West and Samuel Turner arriving at four o’clock on the afternoon of Saturday July 13th, the same evening they visited various parts of the city to select suitable places for open air preaching.  The next morning (Sunday July 14th) they opened their mission by singing through several streets, holding  a service in Poyntzpool (now St. Jude’s) the poorest district in the city, Mr West being the preacher; by contrast the afternoon service was geld in Queen Square, then one of the most aristocratic localities, Mr Turner was the preacher.  The work was vigorously presented and some striking conversions were recorded.  On the 4th August a building known as Dolman’s chapel was taken and became the centre for aggressive enterprise.  It may interest some to learn that the same building is still in existence though no longer bearing proof of its former use.

Nor did the missionaries confine their labours to the city, for they visited Bedminster, Fishponds and Kingswood and met with encouraging success.  The first sermon at Bedminster was delivered on the afternoon of Sunday July 28th, Mr West preaching on the following Sunday and again on the 22nd August in a small rented room, when one person was awakened to a sense of danger as a sinner.  Others had previously been brought to God there under the preaching of Mr Turner.  Mr West preached at Fishponds on Sunday afternoon, August 25th and again on the evening of Monday September 2nd and though it rained the whole of the time, the people stood to the close and the prospect of good was apparent.  On Wednesday September 4th, the missionaries first went to Kingswood and were permitted to preach   in the taproom of a public house.

In five months after the mission was opened there were fifty members in the society; in March 1835 the membership had increased to 172, with twenty preaching places and in March 1837 Bristol was made into a separate circuit with two travelling preachers, twenty local preachers and 190 members.

In 1849, Ebenezer chapel was built at a cost of over £600, the debt being only £300 at the opening, and was for many years the only Connexional property we had in the city.  One of the first members, Mrs Barnes, is still with us.  Chapels have been erected in other parts of the city, Essex Street, Bedminster, Eastville, Mount Tabor &c.

In 1883 the Jubilee was celebrated with great rejoicings, the statistics were then as follows:- 5 Circuits, 9 Ministers (including 3 Supernumeraries), 97 Local Preachers, 74 Class Leaders, 24 Sabbath Schools 415 Teachers, 3,608 Scholars, 1,262 Members, 22 Chapels, 15 Rented Rooms &c with £20,910 as the reported value of chapels and schools.  Since that time severe trials have been confronted, and no doubt accounts for a slow rate of progress, but the crisis is past and we are now consolidating our work, while extension and growth are evident.

Space forbids the mention of many names that have become household words, but among the ministers must be named the devoted and now sainted Rev C T Harris, to whom under God we owe so much.  Also the late Rev. Jno. Butcher; greatefully too may be added Revs E Foizey, J Phipps, E Bishop, T Russell, T Hobson, Sup J Best, R Tuffen, R Hartley and many others.

And now brethren we pray that the coming to Bristol of our Annual Assembly may be a source of blessing to you all as well as ourselves and our churches, and that you will carry away pleasing recollections and inspirations for future services  in the cause of Jesus Christ and humanity.

We are, on behalf of Bristol Primitive Methodists,