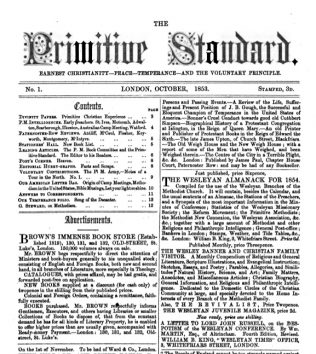 Here is a link to The Primitive Standard.  This Primitive Methodist journal was shortlived, published from 1853-54 by John Wombell, under the editorship of Thomas Church.

The Standard provides a revivalist voice, advocates peace on the eve of the Crimean War, and reveals a surprisingly ecumenical stance. It includes chapel openings and anniversaries, and gives a fascinating window into Primitive Methodism in America and Australia, including the challenge of geography when holding Camp Meetings.

A novel, Harley Beckford begins in the third edition but was never completed in the magazine, but here is a link to the Haithi Trust’s digital version.