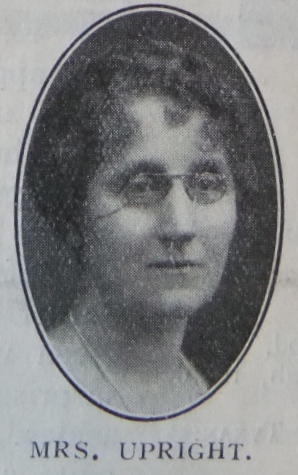 William was born 8 June 1882 at Thornley, to parents Thomas Kelsey Upright and Christian Smith. Thomas was a PM Minister.

William was educated at Elmfield College.

William served for five years as Secretary to the Connexional Probationers’ Examination Committee.

William was Secretary of the 1931 Conference, the conference when his father was elected a Deed Poll Member of Conference and his son, Norman, was received into the ministry.

Whilst at Ellesmere Port, William served as a member of the town council, and was for four years chairman of the Library and Parks Committee.

At Methodist Union, William became Chairman of the former Stoke and Macclesfield District, a post he held for seven years. Then he became a Secretary of the Home Mission Department. As a Connexional Secretary, William was wise in counsel and convincing in advocacy. His outstanding contribution to Home Missions was his evangelistic work in prisons, borstals and approved schools. He was a fine exponent of Wesley’s dictum, ‘Go not only to those who want you, but to those who want you most’. He was a pioneer of Film Evangelism in prisons. His character and work won the praise of the Prison Commissioners. For a number of years William was chairman of the Temperance Committee of the Christian Citizenship Department.

His obituary records that William was gentle, kindly and modest. He had the virtue of humour and was a stalwart friend. A sturdy Protestant and Free Churchman, he was ever magnanimous to those who differed from his views.