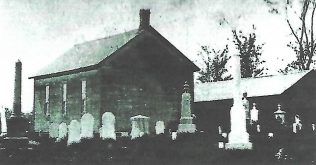 The first chapel here was built by Rev Joseph Miller, who was born in 1829 and ordained in 1851. He left Scott Township (now amalgamated with Uxbridge) about 1857.

About 1851 Joseph Miller donated an acre of land on Concession 7 for a burial ground, on which a log church was built. Originally a Primitive Methodist Church, it became known as Zion Church and Zion Cemetery.

10 years later it was taken over by the Bible Christians, and in 1874 they built a second church on the site. The new church was only occupied for another 10 years. By 1901 it was dilapidated and was moved across the road to be used as a farm shed. The cemetery was not in much better shape.

Thomas Foster’s father and stepmother are buried in the cemetery. In 1924 he bought the land adjoining the cemetery, and gained control of the cemetery in 1927. The Thomas Foster Memorial was dedicated in 1936.