You are here: HomenextPlacesnextScotlandnextGreenock Circuit, Scotland 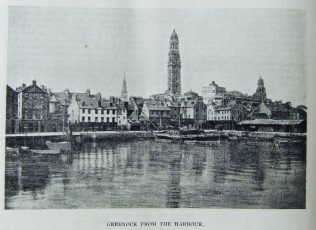 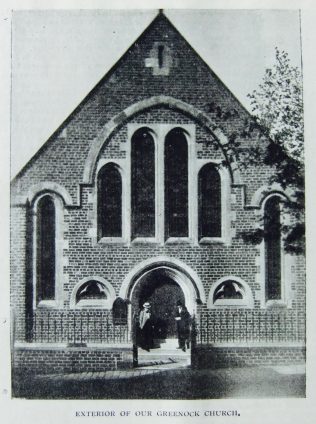 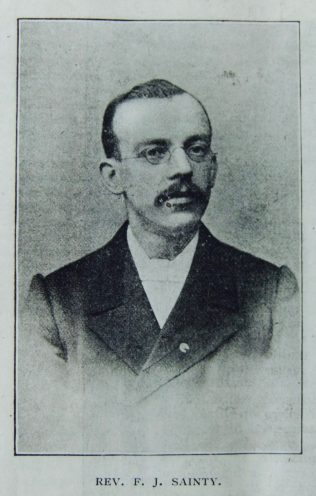 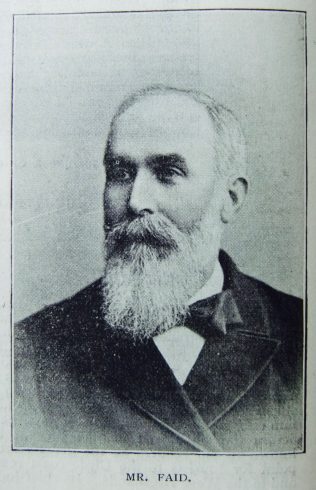 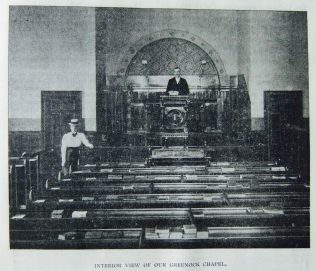 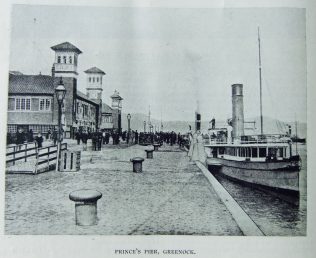 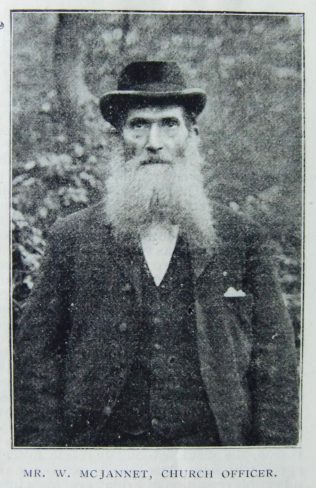 Transcription of Article in the Christian Messenger by ‘Loch Ranza’

The seaport town of Greenock, (which signifies in Gaelic ‘the sunny knoll’) has a population of over 67,000, and is situated on the left bank of the Firth of Clyde at a distance of 23 miles (by rail) from Glasgow. From the river, which at Greenock has a breadth of 2 7/8 miles, the town rises on the slopes of a range of hills, and commands a fine view to the north of the Highland peaks across the Clyde. It will be perhaps best known to our readers as the great starting point for tourists to the Clyde coast resorts and to the West Highlands. Its chief industries are shipbuilding, engineering, (by the way, James Watt was a native of Greenock), weaving, distilling, and sugar refining. A generation ago, sugar refining was the principal trade of the town, but the operation of foreign bounties has almost destroyed the British industry, and Greenock has suffered considerably in consequence.

The town is well supplied with churches, there being no less than 46 places of worship, of which 27 belong to some branch of the Presbyterian Church, and the remaining 17 to various other  denominations, including of course our own. A fine spirit of brotherhood prevails among the Christians of the town. Fraternity is the rule, and every branch of the Church of Christ finds cordial recognition. Our ministers have for long been accustomed to occupy the pulpits of their brethren, and in turn our pulpit has frequently been filled by the most able preachers of other churches.

It has often been said that Primitive Methodism does not ‘take’ in Scotland. No doubt there are special difficulties to contend with, and we have not yet made ourselves known beyond a very small area north of the border. But the churches we have in Scotland are almost without exception flourishing and vigorous. The verdict of experience would seem to be that wherever Primitive Methodism has been well and wisely worked, with a ready adaptation to Scottish peculiarities while preserving intact Methodist principles and aims, it has succeeded. Scotland needs, and its most devoted sons among the Presbyterians acknowledge it, the savour of a fervid evangelism in its midst. If Primitive Methodism will be true to itself and to its Lord, there is no reason why it should not ‘take’ increasingly in the northern kingdom.

Primitive Methodism was introduced into Greenock in 1873 by Rev. Robert Ayres, who was sent by the General Missionary Committee to form a mission there. Earnest toil resulted in a small society being speedily gathered. The G.M.C. urged an immediate building scheme, and under its direction a site was purchased in Roxburgh Street, and a church with hall below, erected in 1874. The cost, including land, was, £2,240, and the debt on completion £1,900. Mr. Ayres was a diligent pastor and a capable preacher, and he saw much good done, although (as is common in Scotland) many of the converts belonged to other churches and our own was not enlarged by them.

The Rev. S. Blackshaw, who travelled here 1879-1883, was also specially appreciated. During his term the congregations increased rapidly and success was realised in all departments. It was never anything but a toil, however, to work a place so heavily burdened, although the missionary grant more than paid the interest. Repeated and successful efforts to reduce the debt weakened the societys’ power to raise money for ordinary purposes, and absorbed a large portion of the time and strength of successive ministers.

In 1890 the Rev. R. Ayres returned for a second term. On a promise being made by the G.M.C. to double what might be raised for debt reduction, Mr. Ayres with commendable enterprise set himself the herculean task of raising £500, and so entirely removing  debt of £1,000 which still remained. A great bazaar was held in 1894, in the inception and carrying out of which the ladies of the larger churches of the town bore an honourable and leading part. The sum desired was just raised, and some time after the mortgage was discharged. Special honour is due to Mr. Ayres, who, at the cost of months of incessant toil, which sadly affected his health, led the scheme to such a triumphant issue. But the grant was now reduced and soon altogether withdrawn. So that the society, enfeebled by the great strain, found itself for a time in a worse position than before, since the entire support of the minister now rested upon the one church which alone forms the station.

Mr. Ayres was succeeded in 1895 by Rev. R.H. Macfarlane, who did good service and who saw many converted. The present minister, the Rev. F. J. Sainty, came to the station in 1898. By the divine blessing great prosperity has of late years been experienced. Without any other means than a direct appeal to the members of the congregation, after a plain statement of the facts, a station deficit of nearly £80 (the most of which was a reminiscence of the bazaar of 1894), has been gradually reduced to £20, and will shortly, it is expected, be further reduced. At the same time this church and station, composed of 86 working-class members, has comfortably supported its approved list preacher without any aid from connexional funds. Nor is the entire financial energy devoted to local ends, for the missionary revenue amounts to over £12. This temporal prosperity is at once an effect and a cause. It has its rise in a deepened spiritual life on the part of the church. And the growing spirit of surrender and stewardship has become an opportunity for God to bless. For does He not say, ‘Bring ye the whole tithe . . . and see if I will not open the windows of heaven.’

There is a Sunday school of over 200 scholars in connection with our cause here. For over twelve years it has been superintended by Mr. (now Bailie) Thomas Baxter, who has thrown his high powers unreservedly into this work. He is well supported by a staff of earnest teachers, of whom he never fails to speak in the most eulogistic terms. He declares that the spiritual tone of the school was never higher than at the present, and he believes that its future is bright with promise. Bailie Baxter fills also the honourable office of church treasurer.

Full advantage has been taken of the Christian Endeavour movement. Our church has both a Y.P.S.C.E. and a junior C.E.S., both of which are affiliated with our own and with the national union. The Y.P. Society, under the leadership of Mr. R. Faid, has been a blessing to many young people, and is increasingly becoming a valuable auxiliary of the church. The chief workers of the church and school are to be found in the ranks of the Endeavourers.

Greenock is fortunate in its church officer, of whom a portrait is given. It may be questioned if Primitive Methodism has a more faithful officer. For the 14 years Mr. McJannet has held the position he has made the interests of the church his own. Early and late he may be found occupied with some service for the house of God, which is to him the gate of heaven. Devout, and enjoying a rich spiritual experience, his presence is like sunshine, while his testimonies in the class are an Inspiration. For long afflicted with deafness, so that he is unable to hear a word of sermon or prayer, he is yet as cheerful as the birds in spring. For he meditates on the law of the Lord day and night, and the secret of the Lord is not hid from him. To him no work is menial which is done for God, and he is right.
‘Who sweeps a room as for Thy laws
Makes that and the action fine.’

The Psalmist’s experience is his also: ‘I had rather be a doorkeeper in the house of my God than to dwell in the tents of wickedness.’ Such loyal and God honouring service demands recognition in such an article as this.

The hope of the station lies in its evangelism and in its young people. ‘Methodism,’ says Hugh Price Hughes, ‘cannot exist without revivals and conversions.’ The Sunday evening services are distinctly evangelistic. A mission hymn-book is used, and a solo or quartette sung at each service. Conversions are expected, and not unfrequently rejoiced in. Many of the younger members of the church have been led to God in and through the church, and have gone forth to win others also. The band of young men and women associated with the society are capable of great and high service, and it is hoped that they will develop in all that is good, and, becoming increasingly devoted to the denomination, be the standard-bearers of the next, generation. It the love of Christ continue to constrain, there can be no fear for the future of the station. For whether there be prophecies they shall be done away; whether there be tongues, they shall cease; whether there be knowledge, it shall vanish away. But love never faileth And it is written that he that doeth the will of God abideth for ever