You are here: HomenextPlacesnextScotlandnextMotherwell Circuit 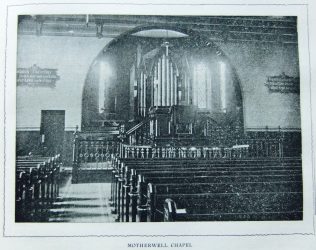 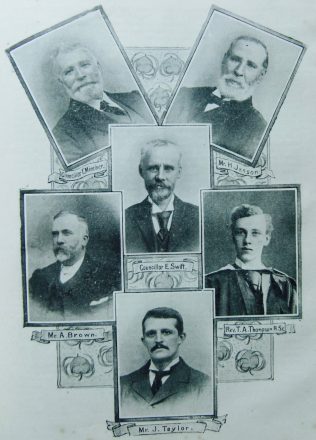 Transcription of Article in the Christian Messenger by Joseph Ritson

A traveller by the ten o’clock express from Euston to Glasgow may be surprised to find the train stopping when some fifteen miles south-east of Glasgow. The station porters shout something which sounds like a cheery – or, as some might think, an impertinent – inquiry as to whether your mother is well. They are, however, simply informing you that the town at which the express has so unexpectedly pulled up is Motherwell. Perhaps the traveller wonders why this place, of which possibly he never heard before, should rank in privilege with great centres like Rugby, and Crewe, and Carlisle. We are not concerned to solve the problem, being quite content with the fact that when journeying either to or from the metropolis the express is willing to stop for our convenience. From the railway the town may look smoky and uninviting; but then Motherwell is one of those places that are better than they look. The writer, at any rate, has found it one of the pleasantest places of sojourn he has ever known. Standing on high ground the smoke has a chance of getting blown away; and from its study window the Methodist Manse commands a fine view of the noble stretch of country lying around Hamilton Palace and the fertile strath of Clyde.

By some the name of Motherwell is derived from Lady Well, an ancient well so called from Mary the Mother of our Lord. In ancient charters, however, the name is written Moderville – Scottish for Motherville, and synonymous with Marytown, ville being French for town. Once upon a time there was much intercourse between France and Scotland. The latter derivation is favoured by the fact that the lands of Moderville, now in possession of the Duke of Hamilton, were given by Malcolm IV. To a foreigner called Tancard. Motherwell is probably, therefore, a corruption of Motherville.

The town has grown to its present size with amazing rapidity. Sixty years ago it consisted of two rows of houses, with a population of 600. In 1865, when it was made a burgh, its population was 4,261. To-day it has a population of over 30,000. The quiet of the little weaving and mining village was first broken in upon by the opening of the railway connecting it with Glasgow. This was followed in a short time by the erection of iron works, which, however, proved unsuccessful. In 1852 these works were acquired by the Glasgow Iron Company – in which year, by the way, the writer was born – and from that period dates the rapid growth of Motherwell. Other firms have been started since, notably that of David Colville and Sons, the famous Dalziel Steel Company. Here also we build bridges, electric cars, and weave silk. The energy and public spirit of its municipal authorities have made Motherwell one of the neatest and best governed towns in the country. It is well supplied with churches, notwithstanding its rapid growth ; and its Fraternal, at which all the ministers outside the Establishment meet monthly, and its united bazaars, in which all the churches join for the benefit of some one church, are among the outward and visible signs of the unity of the churches.

Primitive Methodism is the oldest denomination outside Presbyterianism in the town. It has been said we came in the wake of the Glasgow Iron Company’s English workmen; albeit Motherwell figures in the Station Report of the Glasgow Mission as early as 1848, as a place of worship with which no Sunday School was connected, and with Christopher Hallam, the father of our General Committee Secretary, as Superintendent Minister. In 1850 we still find Mr. Hallam’s name as minister, but the place was then connected with Calderbank Mission. No doubt with the English invasion in 1852 the mission got a new start. At first the services were held in a small schoolroom in Kirk Street. This, becoming too crowded, was exchanged for the old school in Milton Street. In this street a church was built in 1858 at a cost of £400; since then it has been twice enlarged at a total cost of £1,800. It is a brick structure, capable of seating some 550 persons. The interior is very neat and commodious, and is, perhaps, the easiest and pleasantest place to preach in we have ever known. Its organ was for many years the only one in the town.

Mossend, the other place in the station, is distant from Motherwell some two and a half miles. It also has extensive iron works, and seems to have been missioned about the same time as Motherwell. Wishaw at that time formed part of the station, but has for a number of years been independent. Our Mossend Church was built in 1872 while the late Rev. John Gill was stationed there as second preacher. It is a neat and comfortable sanctuary costing over £800, and with sitting accommodation for 200 persons. In 1876 the station was compelled to seek relief from a second married preacher, and in 1879 it was relieved of a second preacher altogether. Troubled times followed, and when in 1886 the present Superintendent was stationed to it for his first term, the Circuit had reached a low ebb. The average quarterly income was only £28, and every fund in connection with both churches was practically bankrupt. Only a single trustee was surviving at Motherwell, and the affairs were in confusion. Within the next five years the station steadily improved in numbers and finances until the average quarterly income went up from £28 to £48, with a Circuit balance of nearly £40, and every other fund in the station had also a balance in the bank.

This steady upward movement was continued under the remarkably successful superintendency of the Rev. A. J. Campbell. The bold project was conceived of organising a Circuit bazaar for the purpose of clearing off the debts of the. two chapels amounting to £450, and to secure funds for the erection of a Manse. The other churches cordially co-operated, and the result was a magnificent success. The debts were swept away, and a handsome surplus left towards the erection of a Manse. The present Manse is valued at £700, and £335 remained from the bazaar towards the undertaking. Since then the debt has been steadily reduced, and will shortly, it is hoped, entirely disappear.

Under these improved circumstances the station felt justified, during the superintendency of the Rev. Robert Clemitson, in calling out a second preacher. At the Bristol Conference the Rev. T. Alexander Thompson, B.Sc., was stationed to it, and is resident at Mossend, where he has already won the esteem and confidence of our people. During the last year a new mission has been opened at New Stevenston, a growing neighbourhood near Holytown, with encouraging prospects. Arrangements are being made for a site of land, and it is hoped that during the present summer a suitable building may be erected for the carrying on of our work.

During its early years Motherwell was much indebted to the late Provost Morton, the manager of the Glasgow Iron Company’s works. He long held the office of Circuit Steward, and liberally supported the cause. His successor in office was Mr. Henry Jesson, who, by his sterling character, wise counsel, and unfailing devotion has been of great service through well on for twenty years of stress and strain. To the great regret of his brethren, he found it necessary last March, in consequence of failing health, to resign his office. A suitable resolution recognising his long and faithful services was adopted by a standing vote. Mr. Jesson’s successor in the Circuit Stewardship is Mr. Allison Brown, who for a number of years served the church very efficiently as School Superintendent, and is also a local preacher, Treasurer of the District Orphan Committee, and the Manse Treasurer. The Society Steward, Mr. Councillor Edward Swift, has also held office about twenty years, and has toiled with enthusiasm in multifarious ways for the cause. He is Secretary also of the District Orphanage Committee. Mr. Richard Wassell, the oldest local preacher, has never faltered in his devotion to the church, and has rendered admirable service also as a class leader. Mr. William Matthews, now of Dumfries, rendered signal service at a critical juncture, and has been a liberal supporter of the church and its schemes of debt reduction. Among younger men Mr. James H. Pugh, for many years Circuit Secretary, is unwearied in his devotion to every branch of church work. Mr. William Deakin is an excellent School Superintendent, a popular local preacher, a successful class leader, and the conductor of the Mission Band; and Mr. Robert Russell is a useful local preacher and a splendid School Secretary and general worker.

At Mossend our oldest local preacher and class leader is Mr. Councillor Thomas Mincher, who has stood by the cause in all weathers, and occupies a position of leadership among his fellow workmen. The Society Steward, Mr. Jeremiah Taylor, is universally trusted and beloved, and carries sunshine and service wherever he goes.

Our position in the town of Motherwell is widely different from what it was fifteen years ago. Then a collection of 30s. for the day was a matter for congratulation; now it often enough reaches £3. But the time has come when some new departure must be made in church accommodation, and many are pondering seriously what that new departure ought to be. Our people are largely English, and the church has all the fervour of old-time Methodism, combined with something of the reverence and decorum of Presbyterianism – a fine combination, surely. Heartier Congregational singing will not be heard anywhere in Primitive Methodism, and at both places the choir masters, Messrs. Gillespie and Grainger, have for years been indefatigable. The prayer meetings, in which the sisters regularly take part, are often especially refreshing.