One of Telford's Forgotten Heroes 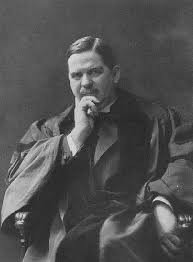 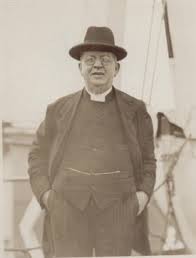 In 2009 I had the great privilege of running the Dawley Heritage Project, a two year project sponsored by Dawley Regeneration Partnership and jointly funded by the Heritage Lottery and Telford Borough Council. One of the aims was to research local notable people and make their stories known.  It was through this process that I became very interested in Samuel Parkes Cadman, who had born in Ketley, but who spent his formative years living in the Dawley Urban District area.  He later emigrated to the USA and became a very famous figure there, yet in Shropshire, where once he was a well-known figure he has been all but forgotten.

Samuel was born to Samuel and Betsy Cadman (Nee Parkes) on 18 December 1864.  Born, we think, at 22 Ketley Sands where the large Ketley roundabout is today.  No birth certificate can be found for him but some documents give his place of birth as Ketley and his elder brother Joseph Robert was born a year earlier at this address. We know he was baptised at Ketley Brook Primitive Methodist Chapel, just up the road from Ketley Sands.  The 1881 census gives his family as living at this address, although interestingly the 1871 census has him and his family living at Forge Row in Old Park.  It is also thought that he might have lived for some time with his half sister and her husband at their home on Ketley Bank when he was young and indeed in the Black Country for a short time with other family members.

Both his father and grandfather were chartermasters in Old Park. But when recession hit, financial necessity meant that Samuel had to work at local pits from the age of 11.  He was known to work at Little Hays and Woodhouse pits which were in the Priorslee area .

Very little is known of Samuel’s early education, but it is thought he attended the ‘Timber yard’ School, which it is believed to be the Malinslee Institute School which was in Old Park and that he was a prolific reader. There is a picture in Ironbridge Gorge museum archives which shows him attending the Timber yard School.

During his time as a miner, he is reputed to have read over 1,000 books. When he started as a Pony Boy down the pits, it is said that he would reading such books as the Bible and Pilgrim’s Progress whilst he worked. At lunchtimes Samuel honed his oratory skills, giving sermons to his fellow miners. He was soon using these skills as a boy preacher in the local Methodist chapels

It is known that he attended Wrekin College’s Mutual Improvers Class as a 16 year old under the direction of John Bayley, the college founder and an ardent Methodist.  The College log book contains frequent commendations for Samuel’s outstanding attainment.  At the age of 20 he was recognised as a fully accredited local preacher at 21, Lawley Bank Methodist Chapel, which he was then attending, with his girlfriend Esther Wooding, and the Wellington Circuit recommended him as a candidate for the Ministry.  He was sponsored by John Bayley to go to  the Wesleyan Theological College at Richmond and his tutor there was quoted as saying to a US Bishop that Samuel ‘was the man who showed the greatest promise’

In 1888, when Samuel graduated from University with debts he was keen to begin his career and marry Lillian Esther Wooding, his childhood sweetheart.

Rather than do his three years’ probation in England where he would have to remain single, he started making arrangements to emigrate to the USA where he would not have to do a probationary period as a single man.  He married Lillian Esther in Buxton in the peak district in October 1888 and he emigrated in 1890 on his own, leaving his wife and newborn baby son behind, having secured positions as Pastor for both Millbrook and Verbank Methodist Churches in New York State before he left England. He hoped to make enough money to bring out his wife and young family as soon as he could. His passage was paid for by miners from Old Park & Lawley.

Rev Parkes Cadman’s first year in America was very successful; his oratory skills and refreshing manner significantly increased both the funds and congregations at both churches. After offering to do much of the work himself, he persuaded church leaders to support the building of a parsonage and in 1891 he returned to England to collect his family and take them back with him to America.

Rev S. Parkes Cadman, as he liked to be known, started making a name for himself as an orator and for writing for the New York Ledger newspaper. In 1893, knowledge of his success as a preacher was spreading. He was offered a position at The Central Methodist Church, Yonkers on a much increased salary. His rising fame led to an increase in this church’s congregation too and in 1895 he moved on to became pastor at the Metropolitan Methodist Church on 7th Avenue in New York. In 1901, while maintaining his position as a Methodist minister, Parkes Cadman was also elected minister of the Central Congregational Church, Brooklyn, New York, with a roll of 3,000 members. He held this post for the rest of his life. He also became president of the American Council of Churches of Christ, a post he held until 1928

Parkes Cadman received his first honorary doctorate of Divinity in 1898 from Syracuse University and Doctor of Laws there in 1922. In 1925 he received the Doctor of Divinity from the prestigious Yale University. There were many other awards he received in his lifetime in recognition of his services including becoming the youngest member to be elected to the General Methodist Conference and a representative to the Councils for Church Order and World Peace

In 1923, his most significant career, however, began when he became a radio preacher with his voice soon reaching an audience of over 30 million listeners nationwide.  This additionally led in 1926 to him writing a column for the New York Herald which was syndicated throughout the USA as ‘Dr Cadman’s Daily Column’.  His articles appeared regularly in more than 1,000 newspapers.

As well as writing a biography on the Bishop of Old Park in 1922, Cadman also wrote a range of religious books. One of the best known of which was ‘The Three Religious Leaders of Oxford: John Wycliffe, John Wesley and Henry Newman (1916)

Despite his fame and increasing wealth, S Parkes Cadman never  forgot his roots.  Each summer he would return home to see his family and to preach in the chapels around the local area, always drawing large crowds to hear his sermons: he was as popular in this area as he was in the USA.

Cadman was an internationally known figure during the 1920s and 30s and an outspoken opponent of Nazi Germany.  He established an influential ‘think tank’ containing many prominent New Yorkers which used to meet regularly to debate issues of the day. His private enthusiasms included his large collection of books and fine art .

He was taken ill suddenly with appendicitis on 5 July 1936 in Westport, upstate New York just one week before his annual trip home to   England.  Despite feeling ill, he carried out his engagement and held an evening service, but was taken into hospital shortly afterwards. He died a few days later on July 12.  His body was taken back to Brooklyn by train for his funeral service in the Central Congregational Church. He was then buried at KensicoCemetery, in Valhalla, Westchester, New York first in the cemetery mausoleum and then in 1938 he was moved to the family plot there. There is also a memorial to him in Brooklyn Plaza, New York and to him and his family at the cemetery in RedLake in Telford.

It is sad to think that Telford has all but forgotten such a major religious figure of the early twentieth century who was one of its sons.  I hope that the town will find ways to formally remember one of its greatest sons and not let him be forgotten.

This article first appeared in the Shropshire WHS Bulletin No. 16, of February, 2012.