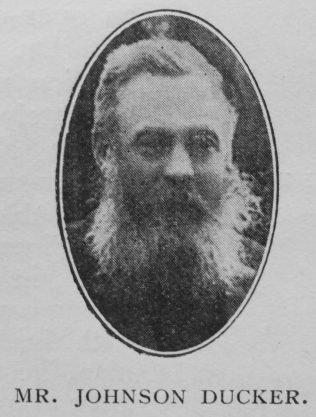 North Ferriby, Hull IV. Circuit, has suffered a great loss in the death of Johnson Ducker, April 27th, 1910. For twenty-seven years he was Superintendent of the Sunday School. The first President of the Band of Hope, a Trustee of the Chapel, and had ability, and could have occupied any office in the Church, which the brethren would have willingly given to him, but in honour he preferred others. There never was a home where God’s servants—ministers and lay preachers—were more kindly received and entertained for many years.

Mr. Ducker was a quiet worker, a good supporter of the Cause of God. The village church property—a fine structure, now debtless—is the result of unwearied effort particularly of Mr. and Mrs Ducker and Mr. G. Ford. Mr. Ducker was a loyal Nonconformist, not an extremist, but a man of conviction and true to principle.

Ten years ago, Mr. Ducker felt keenly the loss of his wife, who was an excellent woman and a rare worker in the Church. It was a severe blow to him to be bereaved of both his sons, fine young fellows, at the age respectively of 18 and 21.

Mr. Ducker was a man of sound judgment, quiet manners, steady, persistent in action, large-hearted in charity. His Christian behaviour in his home, with his work-people, in business, and in the Church, was most exemplary. His end was peace. He was interred on April 30th, when, beside the general public, a large number of persons representing different public bodies were present. Revs. Jas. Shaw, N. Jefferson, and Dr. W. Pigott took part in the service. Rev. T.B. Cawkwell conducted a memorial service on May 15th. On the Monday night following, in a public meeting, what Mr. Ducker had set his heart upon took place. Mr. G. Ford declared the chapel and school debtless.

Johnson was born in 1840 at North Ferriby, Yorkshire, to parents George Ducker, a brickmaker (1861), and Hannah Huntsman.