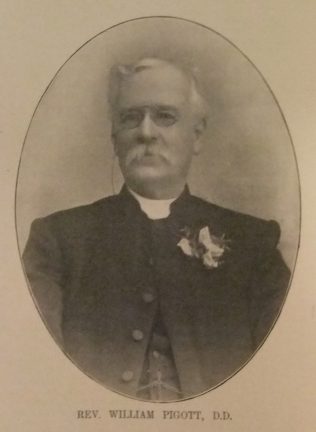 William was born on 27 September 1846 at Luddington, Lincolnshire to parents Enoch and Rachel. Enoch worked the land.

As a child of seven, William was sent out to work in the fields for two-pence per day. He was just eight years old when he received a vision of God. The plough handles served as a desk for his Bible and Lennie’s Grammar.

William became a local preacher at the age of sixteen.

William returned to the Jubilee Chapel at Scarborough to conduct the anniversary services for upwards of twenty years in succession. His obituary records that for anniversary occasions he was in constant demand, since as a preacher he was of outstanding distinction, and as a lecturer and platform speaker he was especially attractive, his fine personality, his impassioned eloquence, and unctuous fervour giving him great influence over the audience.

William’s Doctor of Divinity was conferred on him by Yale University of America.

William married Elizabeth Nicholson (1852-1923) in the spring of 1876 at Hull, Yorkshire. Census returns identify one child.