You are here: HomenextPlacesnextBerkshirenextEast Ilsley, Berkshire 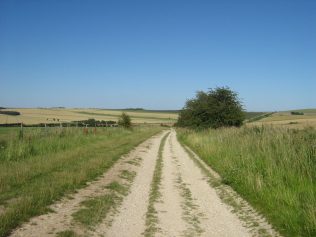 As far as I know there was never a Methodist chapel of any ‘brand’ in East Ilsley, though there is a Baptist chapel and an Anglican church.

Thomas Russell gives us some glimpses into early Primitive Methodist work there in his Record of Events in Primitive Methodism, written in 1869 and re–published in 2005. My quotations from his book concern the work of travelling preaching Elizabeth Smith, who later became his wife. He writes about:

5th September, 1830 Compton… where a Mrs Baker lived, who had heard Miss Smith preach on Illsley Downs. She was brought under deep convictions, and this led to our going there.

(Compton is 1½ miles from East Ilsley. There is a photograph of the chapel in Compton in the Berkshire entries. The first one was built there in 1836. The photograph here was taken on a walk close to East Ilsley Down.)

23rd January, 1831 Visited and preached at East Illsley. Miss Smith first came here; but a vile man came up, and swore that none of us should preach here; but she believed the Lord could turn the lion into a lamb; and it was so, for conviction seized his conscience, and he turned to the Lord. So did Mr. Charles Wilsher. This excellent brother became very useful.

Staying at East Ilsley recently, and walking by the Downs there, my mind went to Elizabeth Smith and Thomas Russell, and early meetings and camp meetings on the downs, which were so lastingly, powerfully and graciously blessed by God.

In the period 1830-2 Elizabeth Smith did much to bring the Gospel to Hampshire, the county where I was born and grew up, and she composed a long hymn containing the lines: