You are here: HomenextTopicsnextTemperancenextTeetotalism in the 1840s

Teetotalism in the 1840s 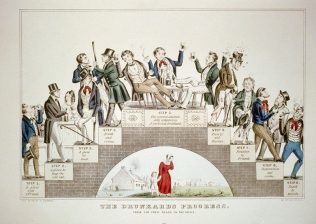 Before 1850, Wesleyan Methodism was broadly hostile to teetotalism.  Its leaders criticised teetotalism as the substitution of a basically secular and ethical crusade for reliance upon religious faith and divine grace. They argued, not unjustly, that teetotal advocacy could have a potentially divisive effect upon societies, as zealous abstainers demanded the exclusion of Methodist liquor dealers. Finally, they noted with alarm the association of temperance with political radicalism, particularly at the height of teetotal Chartism in the years 1840-41.

This opposition culminated in the 1841 Wesleyan Methodist Conference decisions to prohibit teetotal meetings on chapel premises, and the use of unfermented wine instead of port wine at Communion.

In contrast, the Primitive Methodist Conference was recommending temperance societies as early as 1832, and in 1841 ordered the use of unfermented wine at communion. Their stern morality and democratic organisation appealed powerfully to radical abstainers.

Support for teetotalism was more apparent in the smaller sects, notably the Primitive Methodists, Warrenites and Bible Christians, who made greater concessions to local and lay autonomy.

Not all Methodists agreed with the official view. The biggest secession from Wesleyanism over the temperance question was in the St Ives circuit in 1841-2, when 600 Cornish Wesleyans formed ‘The Teetotal Wesleyan Methodists’. Independent Teetotal Methodist societies were also formed at Bingham, Nottinghamshire, and Willenhall, Staffordshire, both about 1843.

In December 1845, Edward Emery, a Primitive Methodist local preacher at Portobello, near Willenhall, joined the independent teetotal society, and a preaching room was established at Portobello, perhaps through Emery’s influence.

Primitive Methodism in the Darlaston circuit had been growing steadily more sympathetic to temperance propaganda since the 1830s. In September 1843, teetotal local preachers at the Circuit Quarterly Meeting secured a ruling which barred members attending the meeting from obtaining alcoholic refreshment from any source. This decision was subsequently revoked, but the trend in favour of temperance is perceptible, and was encouraged by the advent of the Independent Teetotal Methodist Society at Willenhall. In April 1847 the Darlaston Circuit committee minutes recorded:

‘That the members of the Teetotal church at Willenhall be received amongst us upon the rules of our Conference and upon no other conditions.’

By December, Edward Emery had been readmitted to the PM Society and circuit plan, although he was cautioned ‘on the subject of Total Abstinence’. He was accompanied by about 40 secessionists, including their leader, Edward Millard, who became a class leader and local preacher among the Primitives.

Some Wesleyan abstainers managed to cope with criticism of their teetotal views within the chapel, although they faced the problem of whether to partake of fermented wine at the sacrament, or to pass the cup on untested. For those unwilling to compromise their consciences, Primitive Methodism could provide an attractive alternative.

This has been adapted from an article on ‘The Willenhall Teetotal Methodists’, by John J Rowley, in the Bulletin of the West Midlands Branch of the Wesley Historical Society, typescript, no date. A copy is available at Englesea Brook Museum.