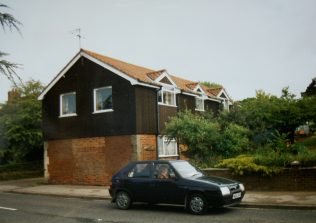 The opening of Roughton Primitive Methodist chapel is recorded by H Sharman in the Primitive Methodist magazine. Opening services took place on Sunday and Monday March 6th and 7th 1829. Praying for the new chapel began at 9pm on Saturday night and continued until the services began. The preachers were Brothers Braithwaite and Cooper.

Mr Sharman tells us that the land cost a great deal. The trustees thanked W Frost and H Howes for the time and labour they put into the erection of the chapel, which measured 18′(w) x 24′(l) x 10′(h).

The Primitive Methodist chapel was recorded in Roughton in William White’s History, Gazetteer, and Directory of Norfolk 1845. I do not know whether the nineteenth century chapel in Keith Guyler’s photograph is the same chapel.

The Primitive Methodist chapel was closed in the 1960s and by the time of Keith Guyler’s photograph in 1998 had been converted into a house – The Old Chapel.

Some conversions retain their identity after conversion; this one looks quite unlike a chapel with its upper story boarding.