Report in the 1904 Magazine 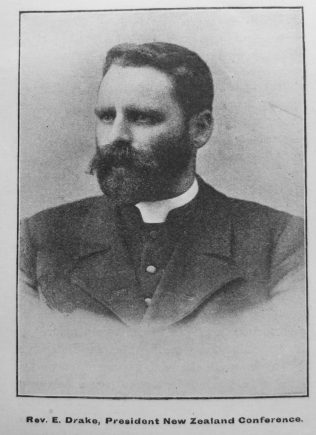 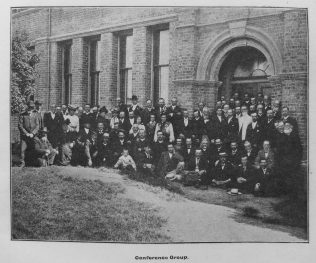 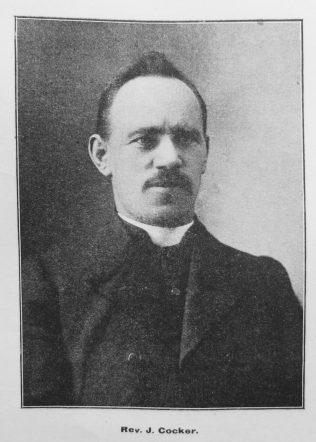 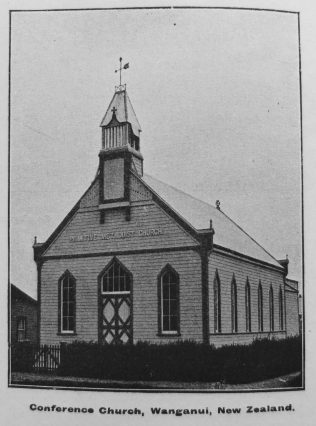 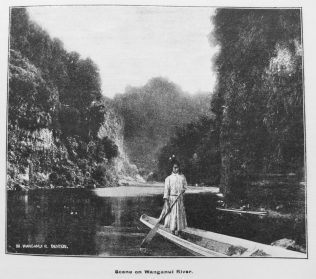 Transcription of Article in the Primitive Methodist Magazine by J Cocker

The Conference this year was held in Wanganui, the fifth town in New Zealand. It has some 11,000 inhabitants and is one of the most beautiful towns in the colony. It is pretty prosperous and progressive, and is full of interest to the visitor. It was one of the earliest mission stations, and was part of a large district greatly disturbed by native rebellions in the past. There are monuments erected to the memory of Europeans and natives who died defending the town, and there are still living many old veterans who fought to defend their homes when the town was attacked by the Maories. The town is an educational centre and is famed for its splendid colleges and technical schools, in addition to its primary and high schools which are amongst the finest in the colony. It is also in the centre of a splendid farming district. It is built upon the banks of the Wanganui river, which has become world-famed for its beauty. It has been named the “Rhine of Australasia.” For more than 100 miles the river is navigable, and travellers come from all parts of the world to gaze upon the beautiful scenery, the panoramic views of which call forth frequent rapturous admiration from the visitor. Language is too weak to adequately describe the scenery, which is of the grandest character. The river is a colonial asset and thousands of persons every year visit the district attracted by the beauty of the upper reaches. A few weeks ago an agent representing a large American tourist company visited the colony, and returned with the determination to largely advertise the river scenery at the coming St. Louis Exhibition.

Primitive Methodism was introduced into this town six years ago by the Rev. J. Cocker, the present minister on the circuit, who was appointed by the 1898 Conference to mission the district. He stood in the street on the sabbath evening and delivered his first address, and then sang on to the old theatre followed by a number of people to whom he preached the gospel. No one had invited a minister of the Connexion to the town, there was no society, Sunday school or church property. The work was commenced in the street, but God has been with the minister and the workers who have gathered round him. Many persons have been converted, two churches have been built, one in the town to seat 350 people and another in a growing suburb. A convenient parsonage also has been built, in addition to which a piece of ground has been leased and a beautiful house built upon it. The trust property is valued at £2,300.

The Conference met on Thursday, January 7th, and elected the Rev. E. Drake to occupy the Presidential chair. The new President is a native of Newcastle-under-Lyme, England. For five years previous to coming to the colony he was an evangelist in connection with the Rev. J. Odell’s Evangelistic Home, during which time he had the joy of leading many persons to the Saviour. In 1893 Mr. Drake came to New Zealand as a minister on probation. He has done good service upon several stations, and has been upon his present circuit for five years. He is a thoughtful preacher, a good administrator, a sympathetic pastor and an earnest worker in the cause of social reform.

Mr. James Embery, the Vice-President, was born in Wiltshire. He has been connected all his life with the Primitive Methodist Church. For 21 years he has been a worker in our Wellington Churches, as Sunday school teacher, local preacher, trustee and member of connexional committees. As a citizen of the Empire city, he is highly respected. A short time ago he was made a Justice of the Peace.

The Conference was the largest ever held in the colony, the plan contained the names of 86 delegates and district representatives, in addition to which there was a large number of visitors from different parts of the colony.

The wear and tear of the work of a colonial minister is such that men need not only to be healthy but physically strong to stand the strain. Many of the circuits are wide, and in all work the minister has to take the initiative. The Rev. B.A. Robinson was given one year’s rest. He has been in the colony two years and has had to rest several times. It is hoped that the twelve months’ rest will prepare him for active service. The Rev. E. Warburton who, a year ago, landed in New Zealand sick and weak has recovered, and is now preaching every Sunday. The Conference unanimously decided to receive him as a minister in the district, and the ministers and laymen generously contributed a large portion of the passage money for Mrs. Warburton and child, from England to New Zealand. May he spend a long and successful ministry in this land in which he has regained his health. The Rev. H. Ramsbottom resigned the ministry. The reason he assigned being that the Work of the Church differed from that of the Church in England. The Conference regretted his resignation but was compelled to accept it. Had he remained longer in the work he would probably have felt less inclined to have resigned. It requires some time for a man to become accustomed to the different conditions of work in the colony.

The following are the statistics for the year:

The above statistics are of a very encouraging nature; they show an increase of 180 members, eight local preachers, five Sunday schools, eight teachers, 175 scholars, two Bands of Hope, 925 abstainers, three churches, two preaching places and 951 hearers. The value of church property has increased from £47,665 to, £53,538, whilst the debt has decreased from £10,518 to £9,548 during the year.

All the funds were in a healthy state. The income for Sunday school purposes amounted to £1,235 and the expenditure to £1,112.

The fire insurance report showed a profit upon the year’s working of £163, the assets being £892.

The report of the District Loan Fund showed the value of the fund to be £1,275.

The Home Mission Fund showed an increase of £31 over that of the previous year.

It was decided to recommend that an annual collection be made in all the Sunday schools in the colony towards the support of a child in our English Connexional Orphanage.

The circuits were recommended to raise at least 3s. 6d. per member for the Home Mission Fund during the year.

For some years there has been an impression amongst both ministers and laymen that a visit from a leading minister of the Connexion in England would be helpful to our Church in this land. Within the last ten years or so the colony has been visited by many of the leading public men of England, including Dr. Clifford, Rev. John McNeil, Mark Guy Pearse, Thomas Cook, J.G. Greenhough, W. Cuff, etc.; but there is a strong desire for one of our own men to visit our own Church. Last year an invitation was given to the Rev. A.T. Guttery to visit the colony, but he was unable to accept the invitation. The last Conference renewed the invitation, and instructed the District Secretary to continue communicating with the Rev. J. Flanagan, with the object of his visiting the colony the year following Mr. Guttery’s visit. We hope that one of the above gentlemen will visit the colony this year.

Never has there been a Conference when the public meetings have been better attended. The church was crowded each evening, and the speakers excelled themselves. Care had been taken to allot to each speaker a subject with which he was well acquainted, the result being that the platform utterances reached a high level and produced a deep impression upon the audiences. The opening sermon was preached by the Rev. J. Sharp, G.C.D., who took as his text John i., 14, after which a sacramental service was held.

On the Friday evening a Citizens’ Meeting was held, when the Rev. J. Dawson, Chairman of the New Zealand Alliance, spoke upon “The present position of the No-License movement in New Zealand”; the Rev. E. Drake spoke upon “The Christian’s duty in relation to social questions and general politics”; and the Rev. G.H. Mann took as his subject “The Gambling Evil.” It was one of the most powerful meetings held during- Conference, and a high state of enthusiasm was reached.

Conference Sunday was a great day. All the Free Church pulpits in the town and district were occupied by ministers attending Conference. On the Sunday afternoon a camp meeting was held. Ideal New Zealand weather prevailed, and there was a large attendance. On the Monday a Young People’s Meeting was held. The chair was occupied by Mr. D. Goldie, the District Secretary, who has been a Sunday school worker for 46 years. The Rev. T.H. Lyon spoke upon “The present position of Sunday school work, and how to make greater progress”; the Rev. P.J. Cossum spoke upon “The object of Endeavourism”; and the Rev. S. Henderson upon “Pleasures and amusements.” The Conference tea and public meeting was held on Tuesday, January 12th, and was a very successful gathering. Mr. W. Dobbs presided, and the speakers were the Revs. G. Smailes, W. Harris, J. Nixon, and W. Laycock. On Wednesday the Missionary Meeting was held, and was presided over by Mr. W. King, who a few years ago attended the Annual Missionary Meeting in London. The Rev. C.E. Ward, son of the Rev. Robert Ward, the pioneer Primitive Methodist missionary in New Zealand, spoke upon “The Missionary Spirit,” the Rev. J. Guy upon “Our African Missions,” and the Rev. B. Dudley upon “The Gospel and the world’s need.” On the Thursday evening an ordination service was held, when the Rev. G.P. Hunt was ordained to the full work of the ministry. The Rev. W.S. Potter delivered the charge to the candidate, and the Rev. J. Dawson delivered the charge to the Church. All the meetings were of an inspiring nature, and the town is better for the Conference gatherings.

Year by year the Conference business increases. This year the sessions extended over eight days, and on the Thursday the Conference sat through the night until about 3 a.m. on Friday morning. There is a growing feeling in favour of preparatory meetings to prepare the business for Conference.

A resolution was passed expressing deep sympathy with our Nonconformist brethren in England in their fight against the objectionable and unjust Education Act.