Report in the 1903 Magazine 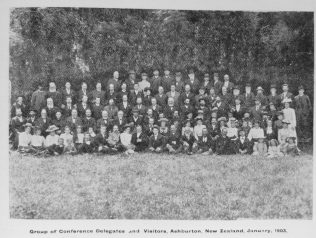 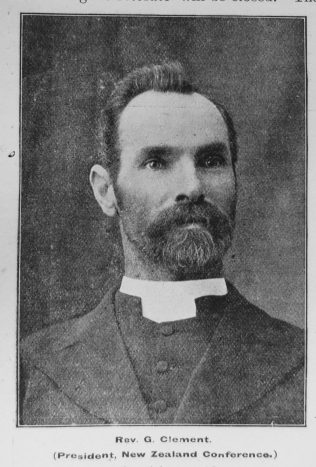 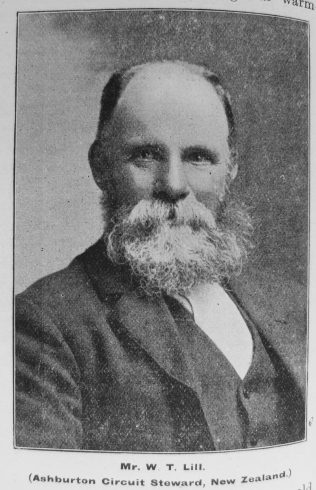 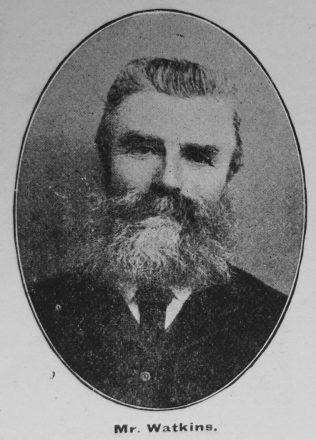 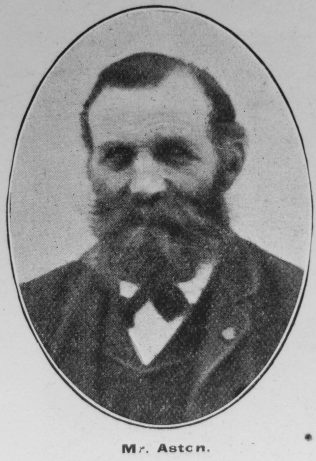 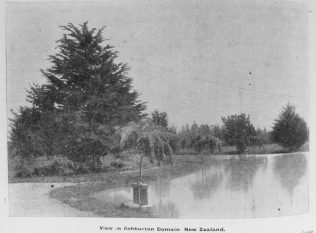 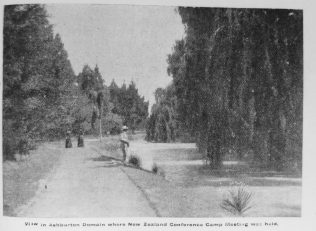 There are not more than 5,000 people in the town and suburbs, but it must be remembered that when compared with the towns and cities of England the colonial towns are very small. This is a new country and the population is less than one million. Sixty years ago a person standing upon one of the hills, and looking across the plains stretching before him for a hundred miles, would have seen nothing but the waving tussuck grass, tu-tu and fern, with a few cabbage trees here and there. What a change has taken place. Fifty-three years ago the first emigrants, or “Canterbury Pilgrims” as they were called, landed and formed the first appearance of a town by building a number of huts amongst the flax bushes upon the banks of what is now known as the river Avon. From those huts the city of Christchurch has grown, until to-day it has a population of close upon 60,000. A little more than thirty years ago the site of the town of Ashburton was covered by tussocks and not a person lived in the district. The writer is acquainted with the lady who at one time was the first and only female living in the township. The town is clean, progressive, and a strong sentiment in favour of temperance prevails in the district.

At the election in November last, Prohibition was carried by more than a three-fifths majority, and in June next all the hotel bars in the large electorate will be closed. The colony will watch with considerable interest to see how Prohibition in this district succeeds. At the time of the vote being taken, a large hotel in the main street was in course of erection. The day, after the poll, work was stopped, and it is proposed to convert the building into shops, etc. The unfinished hotel was looked upon with a good deal of pleasurable interest by the delegates. The writer has a vivid recollection of delivering a temperance address in the street one evening, when two men, who had been supplied with liquor in the hotel which previously stood upon the same site, came out and knocked him down, tearing part of his clothes off his body. That was an incident on the way to victory.

Primitive Methodist services were commenced in the town in the year 1874, and the story of the introduction of Primitive Methodism into this town is an illustration of the truth that seed sown in one land may bear abundant fruit in another part of the world. Mr. E. Watkins, a genial warm-hearted Primitive Methodist from the old land, settled in the district, and, as there were no permanent religious services held in the township, he took steps to commence services. He went to the “Emigration Barracks,” where a number of persons newly arrived from England were residing, and asked if there were any “Methodists in the buiding.” He was introduced to Mr. G. Aston, who, his ship-mates declared, “had been singing hymns all the way out from the old land.” After a warm hearty greeting the two men went and knelt among the tussocks, upon ground now occupied by one of the main buildings of the town, and prayed for God to open the way. Mr. Aston was a Wesleyan Methodist, and when the prayer meeting was over, Mr. Watkins said “Well, which shall it be, Primitive or Wesleyan?” Mr. Aston, touched by the friendly welcome, replied that “it had better be the Primitives.” On August 16th, 1874, services were commenced in the public schoolroom, and the church has continued to make progress in the district. To-day there are seven preaching places in the circuit. Our Ashburton Church has many able and warm-hearted officials and local preachers who are loyal to the Primitive Methodist Church. In the year after the commencement of services, Mr. W.T. Lill removed to Ashburton, and soon became a local preacher, and for many years has been circuit steward. Messrs. Lill and Watkins were delegates to the last Conference, and Mr. Aston is still an active worker in the church.

The Rev. G. Clement, who had the honour of being unanimously elected President of Conference, was born at Rownton, Yorkshire, forty-two years ago, and, when seventeen years of age, was converted under the preaching of the Rev. W. Gelley. He was sent out to this country by the Conference of 1887, and he has had a successful ministry; on all his stations he has had the joy of leading persons to Christ, and of reporting yearly increases of members and scholars. He has also been a builder of churches. He is a good visitor, gives close attention to the various funds upon his stations, and is a capital organizer. His work is not of a show nature, but is solid and substantial.

Mr. William King, the Vice-President, is a reliable official of our church, and hails from Dunedin. He was born at Burghfield, Berkshire, in 1846. His father was one of five brothers, all of whom were local preachers of our church. His father was a local preacher for sixty-two years. Twenty-five years ago Mr. King came to New Zealand, and has worked hard for the church he loves. Two years ago Mr. King visited the home country and represented New Zealand at the Annual Missionary Meeting in the City Temple. He has been a successful business man, and the church has shared in his prosperity:  both in land and money he has made substantial donations to the church.

was probably the largest ever held in New Zealand. The Conference plan contained the names of seventy-six delegates and officials. The number attending was about seventy; a pleasing and encouraging feature being the number of young men who were delegates, and betrayed considerable interest in the business. It was a progressive Conference. No less than five men were received as ministers on probation, and two extra Home Missionaries were employed. A second minister was placed in the Wellington I. station. Christchurch called out a second man. A Home Missionary was stationed at Waikonaiti, where a hall had been given to the connexion, and the congregation worshipping in it had invited us to send a minister, promising substantial support. A Home Missionary was appointed to follow up settlement in the back blocks some fifty miles distant from Stratford, in the North Island. A second minister was stationed in the Geraldine circuit.

The reports showed that all the funds were in a healthy flourishing state, and that the people had been very liberal during the year. The Church Loan Fund report showed the value of the fund to be £1,217. The income in connection with the Children’s Equalization Fund was £315, and expenditure £314. The Contingent Fund income £75, expenditure £65. The profits in connection with the working of the Fire Insurance Fund were £132 for the year, the total value of the fund being £729. The report of the Sunday Schools showed an income of £1,000, an increase of £141. The Home Mission Fund report showed an income of £494 for the year. The profits upon the New Zealand Primitive Methodist were £40. The report of the New Zealand Superannuated Ministers’ Widows and Orphans Fund showed the capital value of the fund to be £2,251, being a gain of £239 for the year.

The income for trust purposes during the year was £5,500, and for circuit purposes £5,400, making an average income to these two funds of £4 18s. per member. An amount which shows that our people are very liberal. The following are the

The increase of members reported for the year is 126, while an increase of 3 Sunday Schools, 15 teachers, and 108 scholars was reported. The public services were well attended, and were marked by much spiritual power. Sunday was a great day. The weather was perfect and the attendance at the camp meeting was very good. The Conference church in the morning was filled, and in the evening was crowded to overflowing. The writer conducted the evening service, which began at 6.30 and closed at 11 p.m. After the preaching service an old-fashioned lovefeast was held, when there was a wonderful manifestion of power and enthusiasm. The meeting will be long remembered by those who were present; six persons professed conversion in the meeting.

The ordination of the Revs. J. Southern and B. Dudley to the full work of the ministry was an impressive ceremony. The ordination charge was delivered by the President, and the charge to the Church was delivered by the Rev. T.H. Lyon. After which the President, on behalf of the Conference, presented to each of the newly-ordained members a beautifully bound copy of the Scriptures.

It was decided to request the Sunday Schools of the colony to support one orphan in the English Connexional Orphanage, with a hope that the schools would be able to support two orphans next year.

The Rev. A. Guttery was appointed delegate to the English Conference and the Rev. James Travis, vice-delegate. The Rev. A.J. Smith, Messrs. W.R. Bootland and W.E. Parker were elected as district representatives upon the General Committee and Quarterly Missionary Committee.

A resolution was passed expressing the Conferences disapproval of the English Education Bill, and deep sympathy with the Free Churches in their struggle against the Act.

It was unanimously decided to ask the Rev. A. Guttery to visit New Zealand this year, and that the District Executive should enter into communication with the Rev. J. Flanagan with a view to his visiting this land next year.