Report in the 1906 Magazine 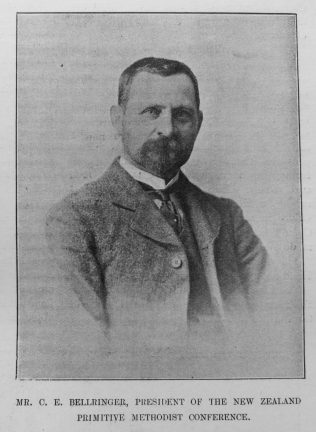 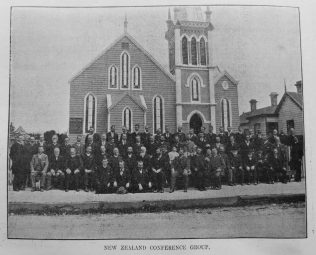 THE Conference this year was held at Invercargill, the fifth city in size and importance in this Colony. Thirty-four years ago services in connection with our Church were commenced in this town. Since then the circuit has grown and extended, Invercargill II., Bluff, and Edendale, being children of the parent station. Only once before, and that eighteen years ago has the Conference met in Invercargill. This may be accounted for by the fact that the town is at the southern end of the South Island and delegates from the far northern circuits have to travel a thousand miles each way to attend Conference and this means a large expenditure of time and money.

Additional interest was given to the visit on account of the town having recently voted No License.

The first public meeting was conducted in the Don Street Church, on Thursday evening, January 11th, by the Rev. G.H. Mann, G.C.D., who preached a deeply interesting, and impressive sermon on “Qualifying Power.” The service was a good beginning. The church was full, the congregation deeply devotional, and the preacher’s heart was evidently overflowing with the power and love of which he spake. Very wisely did he select, not a doctrinal or a theoretical, but an intensely spiritual subject, and, before commencing the business of the Conference, the delegates received a spiritual uplift.

At 10 a.m. on Friday, January 12th, the Conference met. After devotional exercises the election of officers took place. Mr. C.E. Bellringer, a layman residing in New Plymouth, was unanimously elected to the position of President. He belongs to a loyal Primitive Methodist family. His father fifteen years ago occupied the Presidential chair. Thus in due course after the father came the son. The new President has taken a deep interest not only in our own church work but in the social life and civic progress of his native town, and as town councillor, and member of local governing bodies has done good work for the district. He is highly respected for his sterling Christian character, always commanding the confidence of the people. He made an excellent President, holding the reins firmly and by his ruling saved useless discussion. The Rev. J. Olphert was elected Vice-President, and the Rev. B. DudIey was elected to the position of Secretary. After the election of committees, the

The Rev. J. Sharp delivered his address, which was of a very interesting nature.

The public meetings were well attended. Open air meetings were held at which the Gospel was preached. On the Conference Sunday the pulpits of the various churches were occupied by the ministers of the Conference. The camp meeting was well attended, and in the evening a very spiritual lovefeast was held. On the Monday a “Citizens’ Meeting” was held in the First Presbyterian Church, when the Mayor of Invercargill presided and suitable addresses were delivered by the Revs. W. Laycock and G.W. Smailes, and the President of Conference. On the Tuesday an Endeavour Rally was held in the Wesleyan Church. The Rev. E. Drake spoke upon “Character Building,” and the

Rev. J . Clover took as his subject “The Susceptibility of the Young to Impression.” On Wednesday evening “An Open Parliament” was held. The Rev. S. Henderson spoke upon “The Church and the Young,” and the Rev. B. Dudley spoke on “The Church and the Alienated.” A very interesting and profitable discussion followed, many of the delegates taking part. On Thursday the Conference Soiree was held and was very largely attended. At the after meeting the Church was crowded to overflowing. Addresses were delivered by the Revs. W. Harris, T.H. Lyon, and W.S. Potter. On the Friday evening an Ordination service was held when the Rev. T. Coatsworth was ordained to the full work of the ministry.  The President presided. The Rev. C.E. Ward delivered the charge to the candidate and the Rev. J. Clover delivered the charge to the congregation. The service was of a very impressive character.

Missionary affairs received considerable attention. The Church during recent years has considerably extended its borders and the drain upon the missionary funds has been heavy. Many of the stations are not yet self-supporting, some being in newly settled back block districts. Open doors presented themselves, but we were hindered from going forward both for want of men and money. Last year more money was raised for Home Mission purposes than ever before in the history of the Church in the Colony, and this year efforts are to he made to raise a still larger sum.

The report of the English Orphanage Fund showed an income of £16 4s. 9d.

The Fire Insurance Fund showed a profit of £142 for the year, and present value of the fund to be £1,172

The report of the Publishing Committee showed an income of £298. The not profits being £65. The pro?ts upon the “New Zealand Primitive Methodists” were about £60, and were devoted to Home Mission purposes.

Legislation for the formation of five sub-districts in the Colony was discussed and sent on to the English Conference for approval. The legislation had been submitted to the quarterly meetings, and by overwhelming majorities they had voted in favour of it. At the present time only one annual gathering is held in the Colony, and much detail work has to be done which ought to be done in district meetings. The time of the Conference is taken by the discussion of matters which are not of great importance but often hinder the discussion of larger questions. It was also felt that these matters could be better settled in the localities affected by them. A local centre is necessary. The meetings will be of a preparatory nature, and will prepare the business for the Conference.

In this Colony our Church continues to make progress. In looking over the growth for the last fifteen years there is much encouragement to be found.

We give the following figures for the years:-

The above figures are inspiring. In fifteen years we have almost doubled the number of our churches, but we have done more than this: in some cases old buildings have given place to beautiful, up-to-date churches, whilst others have been enlarged. The number of ministers has almost been doubled, and thirteen new circuits formed – nearly one new circuit each year. The membership has almost doubled and the hearers nearly trebled, whilst the value of church property has more than doubled. Surely such a record will compare very favourably with any Church in this land. We have every reason to be proud of our progress, and deeply thankful to God for the success He has given us.

The statistics for the present year are as encouraging as those of the past years.

The following are the statistics for the year:-

The Rev. T.A. Pybus was granted six months leave of absence to recruit his health. He intends to visit England and was appointed delegate to the English Conference.

The Conference decided to ask the English Conference to arrange for the Rev. J. Flanagan to pay a visit to these shores, feeling sure that an extended evangelistic tour of this land by Mr. Flanagan would be a blessing to our Church. We hope the request will be granted.

The Conference was a good one, there was a hopeful and progressive spirit. It was decided to commence a mission in Palmerston North, one of the largest towns in the North Island.