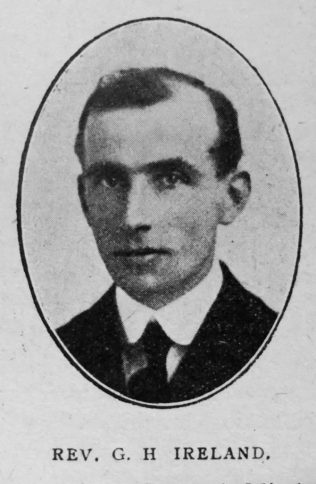 GEORGE HENRY IRELAND, M.A.: born in Swinton, Manchester, in 1891 he brought many accomplishments to the service of his Master. He graduated at Cambridge with second class honours in the Theological Tripos, and was also a Fellow of the Institute of Chartered Accountants. After training at Hartley College he served in the following circuits: Herts. and Beds., Cambridge, Chesterfield I, Hull V., Quinton, Patrington, the Sussex Mission, London (Sydenham & Forest Hill), Haworth & Oakworth, Kilsyth, Rhosymedre & Chirk, Thornley and Houghton-le-Spring. From 1961 he continued his pastoral work as an active supernumerary at Edenfield in the Bury Circuit, and from September 1965 at Trewellard in the St Just Circuit. In addition to usual ministerial duties, he served as a correspondence tutor in Theology for Probationers, and as treasurer of the Primitive Methodist Itinerant Preachers Friendly Society, in which office he exercised a real pastoral ministry. He was still a trustee of this Society at the time of his death. During his service in the South London District he was appointed assistant secretary for the Synod. Because of his keen mind and his unbounded interest in the ordinary things that fill people’s lives he made many friends. Among these he numbered many prominent people – scholars, and outstanding personalities in many different occupations and in all branches of the Christian Church. But he was always mindful that he was a pastor, and his witness to his faith, though quiet, was always effective. One of his last earthly thrills was found in the reading of the “Upper Room” chapters of St John from his Greek Testament in the West Cornwall hospital. In this we may find an indication of the inner secret of his life. He died on 3 April 1966, in the seventy-sixth year of his age, and the forty-ninth of his ministry.

George was born in 1891 at Swinton, Manchester, Lancashire, to parents Thomas George Ireland and Isabella. Thomas was an insurance agent.