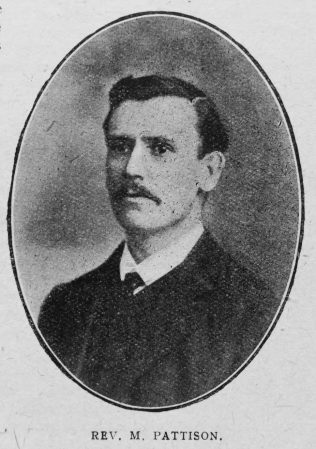 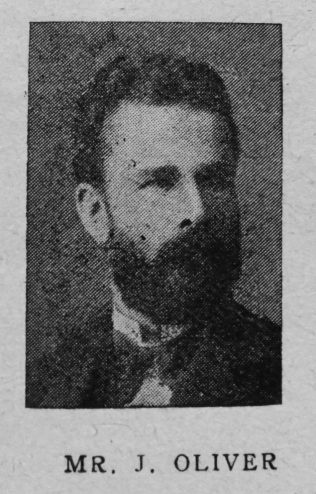 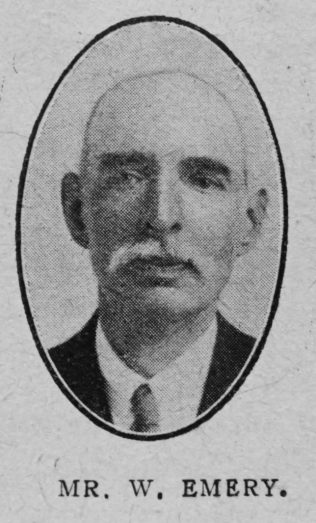 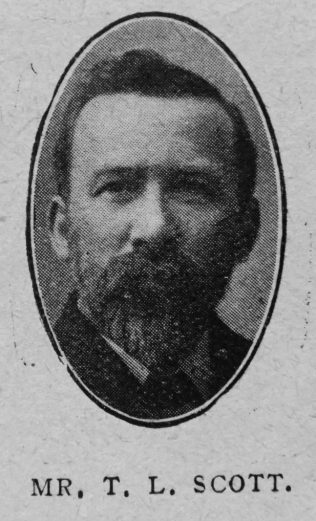 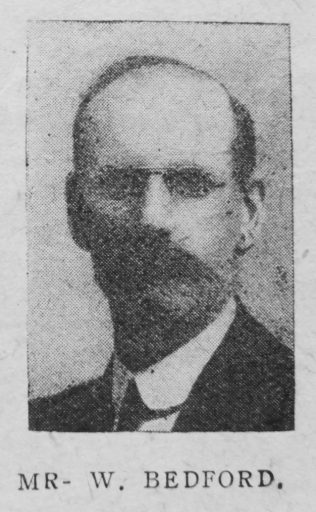 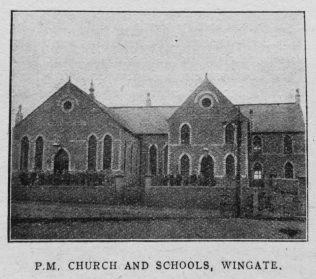 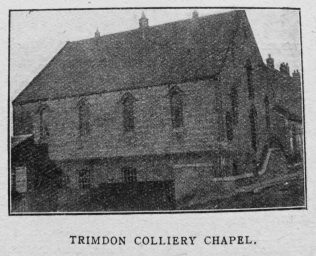 Transcription of Article in the Christian Messenger by Rev. Mark Pattison

Wingate is a station of length only, covers a strip of ground stretching from Trimdon Colliery to Blackhall on the East Coast of Durham. It is a coal-mining district and would therefore require more space to depict its beauties than is allowed by the editor.

The station was formed in 1901, and drew from the old Thornley Circuit, Wingate, Castle Eden, Trimdon Colliery, and Station Town. Castle Eden passed into the new circuit, not as s source of strength, but s source of weakness. The mine there was closed, the church was helpless and is helpless to-day. Yet no fear was entertained respecting the future of the circuit. The group, apart from Castle Eden, was a strong one and further, carried away with it Mr. William Glass, the old Circuit Steward.

Mr. Glass, in himself, was a guarantee of the wisdom of the venture. In matters of judgment, spiritual zeal and generosity he was a reliable guide, a splendid example. The post of Circuit Steward was held by him for eleven years, when he passed to higher service. How much he had to do in the shaping of the circuit’s policy is not difficult to imagine. In those eleven years, the history of the circuit is to no small extent history of Mr. William Glass. His influence still lives, and one does not wonder at the circuit’s high appreciation of his character and how keenly his loss was felt.

But whilst acknowledged leader, Mr. Glass had behind him a body of officials capable and deeply interested in the welfare of the circuit.

The ministry of the new station fell into capable and experienced hands. The dalesman with a fine head, big voice and large sympathetic heart, was just the type of minister the circuit needed. The travelling days of the Rev. T.J. Watson are done, but his memory is fresh and green in the heart of one station at least, that had the pleasure and benefit of his ministry.

The First Quarterly Meeting began to cast about for possible openings of new causes, but it was not until some seven years ago, when Blackhall Colliery was opened, that a real opportunity was afforded. The circuit has now five preaching places, 384 members and 855 scholars. Mr. W. Emery, of Station Town, is the Circuit Steward, and has been since the death of Mr. W. Glass. No circuit has a worthier steward. He is reliable in every sense of that term. His judgment is sound, his promise means its fulfilment, his confidence is honour itself. He understands finance, and understands, too, that in circuit matters, finance is a means to an end. The spiritual prosperity of the circuit is the ultimate object. A circuit with a steward of the type of Mr. Emery is fortunate indeed.

The cause at Wingate itself has a worthy tradition. It began in Humble Lane in a humble way. The society, however was composed of men who were not born to live and die in Humble Lane. The character and spiritual zeal of these men were such, that the miners of Wingate could not remain long uninfluenced by them. The power of God was often wondrously made manifest in the saving of souls. Mr. W. Glass was a brickmaker in more senses than one. In the work of re-moulding bricks he was always deeply interested, but his chief delight lay in moulding new bricks. He was pre-eminently a Sunday-school worker, and secured the future of our cause at Wingate by building into it bricks of his own moulding. He had not a little to do in focusing the interest of the Sunderland and Newcastle District on Sunday-school work. Yet his influence passed beyond the boundary of his own district. The William Glass Shield has inspired many others to go and do likewise.

Some twenty-two years ago our people moved out of Humble Lane into their present church and school in Front Street. These premises were built at a cost of £3,700. Towards the scheme Mr. Glass gave a £1,000 and a good deal of time and thought.

Trimdon Society is of Connexional fame. Its missionary zeal stands unrivalled. There is no church like Trimdon for missions. The Organising Secretary is Mr. T.L. Scott, M.P.S. His interest in missions is like a fire in his bones. He can not only organise, but put spirit into the wheels. The supporters of Willie Jones last year were sure that he was topping the list when his card totalled £8; but the place of honour was not his; he was second to Nellie Stoves, who had collected £10 10s. The atmosphere of the Missionary Meeting is electric. It is needless to say that the chief item of interest in that meeting is the local report. There is no need for speeches justifying missionary work or exhorting the people to interest. Can we break last year’s record? is the question. It was £104, but we shall do better this year! As Mr. Scott is nearing the end of the report, the pent-up feeling has to be occasionally relieved by some little aside on the price of eggs or castor-oil. When the total is reached and it is announced that £128 has been raised, the safety valve is lifted and the Doxology is sung in mighty fashion.

In their zeal for missions, it ought to be said, that the Trimdon friends are not forgetful of the many other interests associated with their church life nor of the interests of the church generally. They can raise £100 for missions and then pay off £70, the remaining debt on their church. The circuit fund is loyally supported and their contributions to such institutions as The Orphanage and Local Preachers’ Aid and S.M.W. & O. Fund are always worthy of them.

This very worthy record has been achieved largely by a quiet systematic giving. The Trimdon people certainly know how to give, it is a religious obligation conscienciously attended to. Practically every institution in connection with their church is in a healthy and hopeful condition. The school has a splendid staff of teachers, all of whom have been subject to a teacher’s examination and regularly attend the teacher’s training-class. Station  Town has as fine a record as you could wish for a society of its size. It shared the same fate as Hesleden, in the closing of the mine. Certainly Station Town was not so isolated as Hesleden, but it had about it men who die hard and not at all if there is the slightest opening for life. The test of loyalty with which they were faced would not break them, however protracted that test. The inevitable was accepted, and the endurance has been most heroic and praiseworthy.

In 1903 it would seem that the fates were bent upon wiping out completely this struggling cause. The church was situated near the railway and was fired, it was thought, by a spark from a passing train and burnt out. But the faith of the little band was like that of Mr. D. L. Moody. When they saw the place was not to be saved they set about collecting for a new church. A much finer site was secured and in 1905 there was erected a church and school at a cost of £1,500. What at the time was regarded as a calamity, judged in the light of subsequent events, might very well be regarded as the day of deliverance. In all probability, since there was no prospect of the mine opening, the society would have contented itself with the old property. This would have been fatal for the place was ill-adapted to their needs, and with no room for extension. In the not distant future, the mine is to be re started. Instead of facing this new demand in inadequate premises, we are ready with a splendid block of property clear of debt. The traditions of a church could not be finer. This heroic little band has stood the test splendidly. Great things have never and could never be attempted, but the great thing has been accomplished by endurance and loyal and systematic support. Mr. W. Emery, ably supported by Councillor Robert Ord, has led this little society to a sublime achievement, and are worthy of the highest praise. Great days are in store for this most worthy church.

Blackhall is the child of the circuit, only six years old, but it possesses abounding vitality, a vitality unnatural for its years. Our work began there in 1911 with two families. To-day we have eighty-four members and a school of 136 scholars. For over four years the society held its meetings in the temporary council schools. Last year, after a very trying experience, including many bitter disappointments, a new school-church was erected at a cost of £496, on a site valued at £534. This was all that could be done under the present government restrictions. It is a modest beginning, but the place is our own and affords scope for useful work. But that a place has been built at all under present conditions is, perhaps, an indication of audacity rather than modesty. As a matter of fact, the Blackhall folk mean it. The little church is packed with splendid material, and under the present crippling conditions a vigilant eye is required to watch that much of this fine material is not spoiled for want of an opportunity. These people need a church to-morrow, and if the Church Extension Committee could see their way to its immediate erection, there would be no wiser appropriation of its funds. A great future is before our church in Blackhall. It is the newest in the East Durham coalfield, and when fully developed, will have within its immediate area a population of 10,000 people. We could not have started in Blackhall with a finer element of church life.

The prospects of the circuit are the brightest. In the near future Wingate Station will rival the strongest in the district. It is full of possibilities. At the close of the war, Blackhall promises to be a great centre, but it is also the key to the re-opening of Hesleden. Every preparation for the draining of the old Castle Eden Colliery has been made. This is to be re-modelled on the lines of Blackhall. It is indeed delightful to think that the contemplated sale of Castle Eden Chapel never matured. There we have a splendid block of property in readiness for the revival of the industry. Hutton Henry, a mile to the South of Wingate, is to be re-opened by Bell Bros. This will mean a revival for Station Town and in all probability a cause will be established at the new Colliery.

A more hopeful future for a circuit can scarcely be imagined and it is a delightful thing to know that the circuit is alive to its opportunity.