You are here: HomenextPlacesnextCheshirenextPrimitive Methodism and "Magic" Methodism

"in Methodism itself there was something queer going on in Cheshire..." 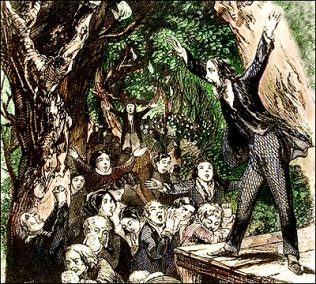 “[J]ust as the early Christian missionaries put up their altars on the sites of pagan temples, so did these early nineteenth-century revivalists set up their pulpits where the devil held sway. Maybe Old Nick outflanked them sometimes without their knowledge, but after all he had had a lot of practise in manoeuvre before they came along. A local North Staffordshire historian named Henry Wedgwood well described the situation in which Hugh Bourne found himself, with the local inhabitants ignorant, brutal and superstitious, afraid of no physical force but apparently scared stiff by the tricks of an innkeeper named Zacchariah Baddeley who professed to work magic. Not only this, but in Methodism itself there was something queer going on in Cheshire. Bourne went to investigate the behaviour of a sect in Delamere Forest who were called the Magic Methodists, and saw there for the first time a woman go into a trance and speak with an inspired tongue. And Bourne, who had gone there to denounce magic, was convinced that this was the voice of God; so much so that he engaged the leader of the sect (who called themselves the Forest Methodists – ‘magic’ being a name bestowed on them by their enemies) to join his own Primitive Methodists and work his magic on the superstitious miners and law-breakers in his own area.”