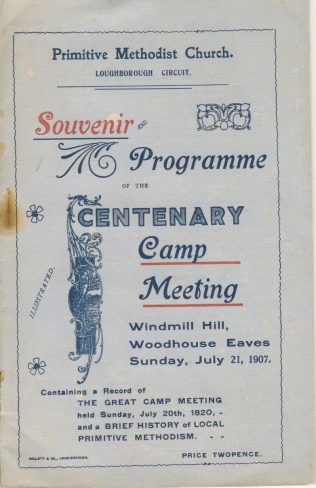 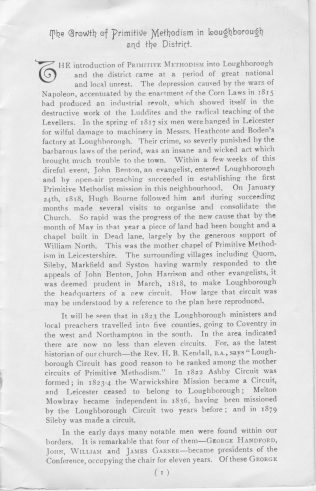 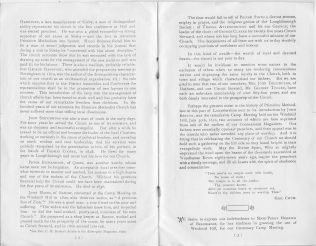 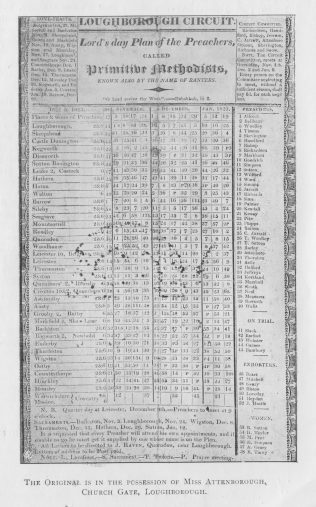 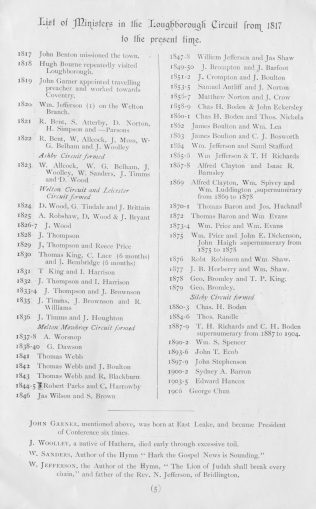 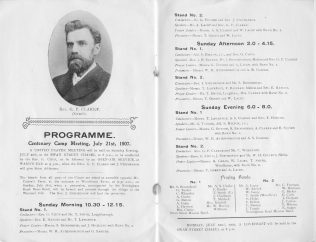 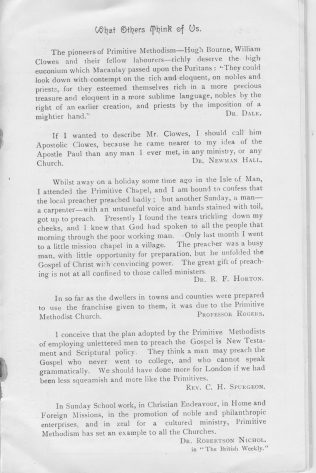 zoom
What others think of us
Centenary Camp Meeting Souvenir Handbook 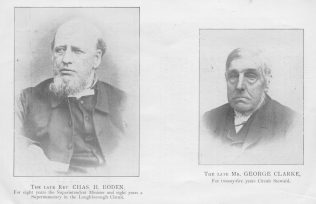 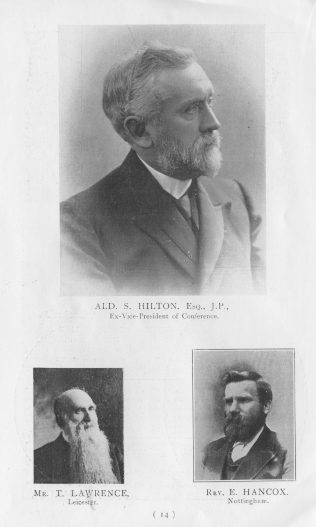 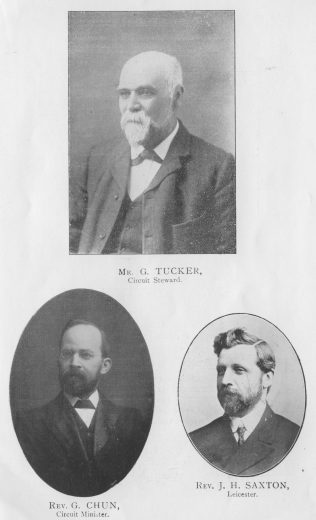 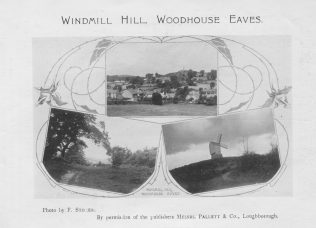 As part of the Primitive Methodist Centenary Celebrations, the Loughborough Circuit held a Centenary Camp Meeting on Windmill Hill at Woodhouse Eaves on Sunday July 21st 1907.  A souvenir programme was issued (price twopence).  It contained not only a brief history of Primitive Methodism in Loughborough, but also articles describing The Great Camp Meeting held at the same venue on Sunday July 20th 1820, a key event for the growing the new church locally. “Three hundred were added to the ranks in Loughborough and its villages.”

There are pictures of:

An account of the Woodhouse Eaves Camp Meeting, held Sunday July 30th 1820; reprinted from A Methodist Magazine, published at Bemersley, and edited by Hugh Bourne.

Our circuit committee being assembled on important business at Loughborough, I took liberty to propose a Circuit Camp Meeting; and they agreed that one should be held at Woodhouse, a village about three miles south of Loughborough, on Sunday, July 30th, 1820: and it was accordingly inserted on the plans, and all the preachers in the circuit were expected to attend.  When this was made known through the circuit, many solemn prayers were offered up to almighty God that he would not only favour us in the weather, but also make it a season never to be forgot.  And glory, all glory to His name, in both respects he granted the requests of his children: he made it a day to be had in everlasting remembrance.

When the memorable day arrived, the solemn services were opened in our usual manner; and a short impressive sermon was preached from Acts xvii,6.  The divine power attended the word; and during the delivery of this, and others of the like nature, many were pricked in their hearts, and began to cry for mercy; and particularly so, when the praying companies began their devotions.  When the praying service had continued the usual time, we endeavoured, by the exertion of human voices, and the sound of a horn, to assemble the large multitude to attend preaching.  But these means could not fully accomplish the purpose; for, in one of the praying companies, the cries of the penitents were so affecting to the praying souls, that no attempt to persuade either the one or the other to attend preaching was unavailing.

At length we succeeded in removing the souls in distress, to the distance of about one hundred yards from the preaching stand; and great numbers repaired with them. The sight soon was extra ordinary, and such as I believe was never before seen in this part of the world.  I compared it in my own mind to a field of action, where two powers were contending.  When sinners, who were praying with the penitents, felt the arrows of the Almighty stick fast within them, they repaired to the multitude who were praying with the penitents.  And so great an effect attended the preachings, and the other praying services, that mourners continued to flock  to the praying multitude, in regular succession as wounded men to an hospital: where numbers found the healing balm  of the Redeemer’s blood to heal their souls.  But the precise number who obtained redemption in the blood of Jesus, it is not possible to ascertain.  The case of one poor backslider, I will endeavour to describe, as being out of the common way: such were the pangs of sorrow which filled his soul, that he appeared as one deeply convulsed, and lay upon the ground for the space of three hours groaning by reason of the disquietness of his heart.  But, thanks be to God after this sore and long conflict he obtained pardon, and was justified; and such a burst of praise and glory echoed between the surrounding hills* as I never heard, and hardly ever expect to hear again.

At the preaching stand to which my post was assigned, five sermons were preached before we separated for dinner; and the same number in the afternoon, (besides the usual praying services:) and in the afternoon, two more preaching stands were occupied, while listening thousands heard the sound of the glorious gospel.  And the Lord graciously poured out of his Spirit all the day, for at so late a period as eight o’clock in the evening, (when I came away), many were in distress.  Nor did I see, during the whole of the day, any appearance of any wishing to disturb; although it is believed, there were not less than seven thousand person present on the occasion.

Before I conclude, I would just observe, that before this meeting we had only preached a few times at this place; and now we have a society of more than thirty , with a prospect of no ordinary kind.  I conclude , by hnoping the period is at no great distance, when we shall hear of Circuit Camp Meetings through the whole of our widely-spreading connexion.

*             Woodhouse is situate among lofty but very pleasant hills, known by the name of Charnwood or Charley Forest, in Leicestershire.

Our friends in Loughborough circuit, left all their preachers at liberty on that Sunday, (July 30, 1820) and printed the following lengthwise in the column, on the plans: This column is the day appointed for the CIRCUIT CAMP MEETING, to be held at WOODHOUSE, three miles south of Loughborough.  -  It is expected that all the preachers in the Circuit will be there – Service to commence at eight o’clock.

In a large circuit formed in branches, such a measure would be inconvenient; and therefore the term GENERAL CAMP MEETING might be adopted, and the number of preachers expected to attend might be stated.  Indeed, at this meeting, the whole of the preachers in the circuit did not actually attend, nor even the whole of the travelling preachers.

Brother Joseph Skevington was appointed to superintend the praying services: and he had previously suggested the idea to brother Jarrat, that if the work broke out largely, it would be well to form a permanent company to pray with the mourners.  And when the companies first divided for prayer, the work was very extensive; and in one of the companies it was very powerful.  On this account, it was extremely proper, at that instant , to form a permanent company to pray with the mourners.  And this company was very large and ver successful.  The pious labourers in it were very steady to their purpose: they did not break  up for dinner but continued, without intermission, to pray with mournersfrom ten or eleven o’clock in the forenoon, till about nine o’clock in the evening.  The forming of this company was an excellent regulation, it caused all the other movements of the meeting to be more regular and harmonious.  When the signal was given for preaching, all mourners, which might be in the other praying companies, might repair immediately to the great praying company.  Indeed so very large and powerful a camp meeting could not have been so well conducted if a permanent praying company had not been formed.

When the first English Camp Meeting was held, a permanent praying company was formed, which did not break up for preaching.  It was not formed to pray for mourners; but a number of earnest pious people fixed a station in a suitable place, and began to carry on a praying service; and they soon had several in distress; and then into liberty.  It was Sunday May 31st 1807, when this took place; and yet this excellent method was never afterwards adopted, till Divine Providence led our friends into it at Loughborough Circuit Camp Meeting.

The following extract from an article in The Aldersgate Magazine for September 1900, entitled “A Precious Son of Zion” by the late Rev. C.H. Boden, throws light upon this remarkable gathering.  After stating that there were contingents from Loughborough, Leicester, East Leake, Ashby, Derby and Nottingham, the account proceeds:-

“The glorious results have never been tabulated, but from presumptive evidence, three hundred were added to the ranks in Loughborough and its villages.  But the results were more far-reaching, extending to the towns from which the auxiliary forces were gathered.  The crowd was immense.  The commissariat failed.  Tradition says that all the wells in the village were dry, all the pumps were exhausted, and neither bread nor water could be obtained.  Out of the many conversions which took place on the memorable occasion there would doubtless be many who would nobly answer the great end of life, but the were lost in the shadows.  ‘It was a famous victory!’  I received the tradition from two or three there present but since departed.”

“There was on that day a notable instance of conversion.  It was that of a youth who fell under ‘the power’ and was carried to one of the praying circles, where he remained unconscious for about three hours, then woke up with the language of praise on his lips, and who continued an unswerving follower of Christ to the day of his death.  I knew him intimately and reckon it a privilege to have had his friendship.”

This was John Mayes of Barrow, for years Circuit Steward of the Loughborough Circuit, ‘a friend indeed’ to the travelling and local preachers, and one whose goodness was inexhaustible.  He died in 1866.