You are here: HomenextPlacesnextLeicestershirenextModern Miracles – Diamonds and Chapels

The impact of a conversion at Wigston Magna on the Leicester II Circuit. 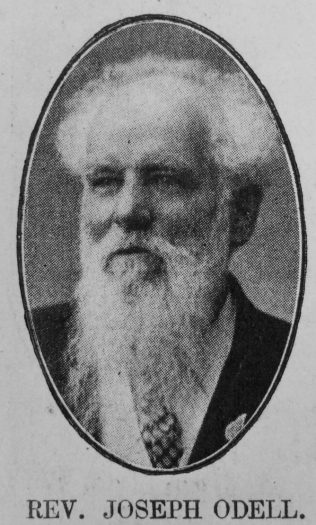 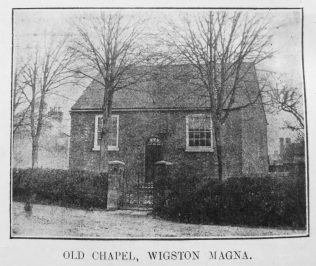 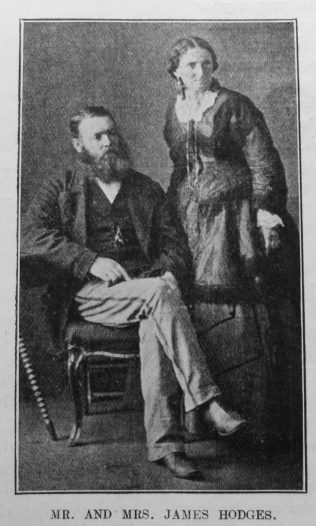 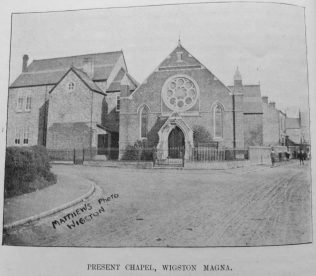 Transcription of an Article in the Primitive Methodist Magazine by Rev. Joseph Odell

The situation of our Wigston Magna Old Chapel was good. No street end out of sight, nor “pudding-bag ” lane such as Leicester knows. The place stood near a main road, so built that it looked down it, while on the left was a right of way to another main road. The chapel always looked lonely as well as poor, the stone above the door with denominational name notwithstanding. Its aspect seemed of the toll-gate house kind, the gate gone and the road clear by common consent. Inside, all was plain and rude, a brick floor up to the pews, the loose seats, no backs, around the barrel pulpit, seemed never to be orderly, they stood as if just deserted by restless boys who would have listened to the sermon but could not on such seats. There was a kind of gallery also; it ranged up from the loose seats to the back wall, and had two aisles with seats against each wall; and double length seats in the middle. These gallery seats evidently intended Amphitheatre grandeur. Certainly, these people deserved the best. I have reason to remember them and to honour them. They were good hearers and better helpers. This old chapel ought to have had a place in the history of Primitive Methodism.

It was the place where Dr. S. Antliff preached his first sermon as a travelling preacher, when on his journey from home to serve the Connexion at Lutterworth. This fact was stated by him in this chapel in a missionary speech; that was a proud moment for the people.

The real glory of this little place was to break within it later. The burdened cloud of good to brighten all things came unexpectedly at a week night service.

I was just concluding, – the final prayer offered, when a stranger in fur cap and suit to match came in; walking from the door to the pulpit stairs, unceremoniously he said,
“I want to come here on Sunday night and sit up yon,” pointing to the top seat by the wall of the gallery. He gave his reason as promptly as his request. “It was there I used to sit with my wench before I crossed the seas for diamonds in Africa.”

I saw it all. Here he was home again. His look forbade the question I wanted to ask, – “Is she living?” for he quickly said,
“We’ll feel better settled and may like to stay about here if we could be as we used to be ere we wed.”

I saw the light of youth play o’er his face as he looked to be assured about that seat for Sunday night. I gladly promised that seat for him and his wife. I told him that the seat holders were faithful friends, one of them the class leader of the Society. He thanked me for the promise and retired.

To me it seemed at first a strange, – even a childish wish. Not so as I recalled it, – there was romance in it. Grateful memories, possibly restored convictions, had prompted both the visit and request. To me also it was providential that I was planned to preach in the chapel that Sunday night. I took tea with the sisters that held the top pew; all was easy; the Sabbath night service arrived, our diamond seeker and his grateful wife found their seats reserved and a hearty welcome also. Both of them looked weatherbeaten, but well preserved.

Our service was of course evangelistic. The text was “Multitudes, multitudes in the valley of decision.” Most orthodox and converting text; the context and all later criticisms aside, it was as a prophetic challenge. The ringing call of these prophet-men who foretold the latter days because they forth-told the Lord’s presence in their days. The sermon took immediate effect. The pre-existing conditions with our visitors, the special debt he owed to God, “Auld Lang Syne” around and fascinating him with a new youthhood as he sat by the side of the bride of long ago, the faithful companion of those years abroad, – these feelings and the Truth applied by the Holy Spirit led to immediate decision. At the conclusion of the first service he left his long remembered seat and stood under the pulpit a weeping penitent. At the first moment of silence he prayed, prayed aloud. Prayer indeed! A life story of deliverances, confessions of wrong-doing, forgetfulness of God, risks and relentings, – mingled with pleadings for forgiveness, punctuated with short, sharp utterances of grief and need. There was faith in that prayer, – penitence sweetened by hope, – the heart’s surest trust. He had thereby God’s good hand upon him, henceforth his heart should be as a trust in God’s keeping – the living hostage for all the future. He was surely accepted. God smiled on his soul and heaven’s beauty rested there until it shone in his face. Another stage in his life was taken.

In four weeks my beloved colleague, Rev. N. Jefferson, the faithful pastor of the circuit, was preaching in the little chapel. It was well that he followed so closely the service I had taken. Brother Jefferson is a teaching pastor of the best scriptural type. Happily for this new convert this shepherd of the Lord’s flock was to administer the Sacrament. That was how we worked the circuit; I evangelised continuously, and he, brave heart, so carefully shepherded the new ones with the old ones that they remain the goodly flock of the Lord to this day. No minister ever deserved better of Leicester Second Circuit than Rev. N. Jefferson. For him to hold a sacramental service in any village chapel was as important and impressive as the most ostentatious mass at cloistered shrine in hallowed cathedral. That sacrament meant always vow to Christ and victory by faith. The new convert and his wife felt that. The happy pair entered the Holy Church of the Lord Jesus. Powerful convictions had crystallised into sudden sublime character. Mr. Hodges had been profoundly stirred by observing the miraculous change in one whose early life he knew. Mr. J.D. Broughton, as a practical Christian, had convinced our diamond friend that “All things were possible in Christ,” and he gladly joined his class, and was forthwith altogether one with us.

To recount all the results of that conversion and communion would be impossible. In the last year of my stay on that circuit my colleague informed me of property that this “diamond” brother wished to give to provide a proper place of worship. I really evaded the offer. To receive property for religious purposes in England is fraught with danger and legal difficulty.

On December 24th, 1884, Mr. Hodges would not be put off, and he came to my house, “deeds and all.” Even then I would only bank them jointly in our two names, and stipulated his full right to withdraw up to March Quarter Day. There was no withdrawal. The circuit took steps to acquire what Mr, Hodges persisted in giving. For the direction and development of the gift, the Connexion is indebted to Rev. H. Carden, my successor. He is a most painstaking superintendent, – plodding, persistent, a most reliable chapel man, his noble building at Kettering Road, Northampton, being evidence. To have such care and counsel in this delicate business of appropriating this gift was very much. I have before me a scrupulously careful statement of the application of the gift. The old chapel gave place to a substantial property, with schools equal to the best of our village properties.

Our beloved “diamond” giver lived to share many of its blessed services. Other chapels participated in the gift – Clarendon Park, Crown Street, Cosby, also; a village mission that deserves a golden story all its own. These chapels are for the Ministry of Evangelism.

By this ministry the dirt of life can he changed to diamonds. In such places human gems can be polished and divinely set. Good chapels add strength, dignity, attraction to a circuit. Leicester Second Circuit, by one Sunday night’s service, quite unconsciously received a new right arm of substance and success. Such a circuit should hold evangelism dear for ever.

With spheres for half-a-dozen ministers within the area of their famous chapels the circuit should provide an immeasurable influence for the Centenary and onward.

While my brave successor, Rev. Henry Carden, now holds the presentation diamond ring of the convert, we glorify God for the fragrant memory of that one conversion.