You are here: HomenextTopicsnextOverseas MissionnextDid the Primitive Methodists have the equivalent of JMA?

Did the Primitive Methodists have the equivalent of JMA?

- and if so did they have their own medals? 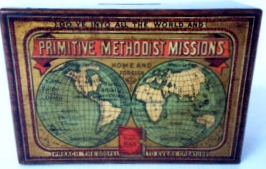 The Wesleyan JMA was put on a surer footing in 1903 with the introduction of medals and bars.  But what about the Primitive Methodists ?

PMs had juvenile collectors and boxes but I find no record of medals.  The earliest missionary boxes, made of wood, were PM (there are several examples at Englesea Brook Museum).

In Primitive Methodist Missionary Notices in the 1850s there are references to a Children’s Magazine (1851-2) and a Juvenile Magazine (1852-9) in connection with contributions to an Australian Fund.

In January 1895, The Record has an account of London St Sunday School in Reading raising £65 for the African Fund, on “a fixed plan in the Sunday School, that each class shall contribute something weekly all through the year” and lists the amounts raised by

The back page of The Record most months in 1895 had an announcement: “Juvenile Missionary Meetings in aid of the African Fund shall be held in every Sunday School … Specially Prepared Speeches for the Meetings of 1895 [can be had] from the Book Room”, followed by an announcement about “Prizes for Juvenile Collectors for the African Fund” for the three highest amounts collected in the connexion: 1st prize £1, 2nd 15/-, 3rd 10/-.  (In 1896 the 1st prize went to the collector of £11,14s.8d.)

A Q&A in The Record, Jan 1896: “My Sunday School has a Missionary box and makes a monthly collection; last year the money was sent to the Home and Colonial Fund, was this right?”   “No. All missionary money raised in this was by Sunday Schools should be sent to the African Fund, according to existing Missionary regulations.”

So yes, PMs had an “equivalent of JMA”.

I am grateful to Revd John R Pritchard for providing the answer to this query.

The PM Missionary Society was founded in 1843.