An overview of its development 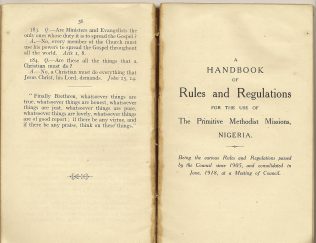 zoom
A Handbook of Rules and Regulations for the use of The Primitive Methodist Missions, Nigeria, 1918
Englesea Brook Museum

Many people have written about Primitive Methodism and its life of about 125 years. [1] It began in the early nineteenth century in the Potteries of Staffordshire and was a missionary movement from the beginning. Circuits ran their own missions and the movement spread spectacularly across the UK. Industrial areas in the Midlands and North of England, rural East Anglia and the mining valleys of South Wales became strongholds of Primitive Methodism. Working class people were drawn into this movement and its missionaries around Britain included young people and women.

As far as the wider world was concerned churches started among British settlers in the USA, Australia, New Zealand and Canada. [2] These were often staffed by ministers from Britain but the colonial churches quickly became self-supporting and eventually joined with other churches.

The other part of PM overseas mission consisted of work in Africa and became known as foreign missions and was supported by the Africa Fund of the Primitive Methodist Missionary Society. Prior to that PMMS funds were mainly directed towards mission in Britain.

After its early expansion the PM Connexion had a strong District orientation and the Norwich District is credited with initiating the African mission. Joseph Diboll, a shoemaker from Yarmouth, mooted the idea of such a mission at the Sheffield Conference of 1837 but nothing came of it and Diboll entered African missionary work with the Baptists. The Norwich District maintained its Africa mission interest and Thomas Lowe and James Fuller of Swaffham held the first missionary meeting for African missions there in May 1852. Lowe was an enthusiast for Africa and £40 5s [equivalent to about £4000 today] was raised for Africa and three men volunteered for the work. Nevertheless, these funds, substantial in those days, were insufficient for embarking on mission in Africa and Conference was unwilling to commit the PMs to this venture though some suspected that this was because the initiative came from the Norwich District. Interest grew, however, and in 1860 ‘The Connexion as a whole became committed to the African mission’ [3] which could begin when enough funds became available. In 1870 missions were opened in West and South Africa [4] and in 1893 the PMs started their work in Central Africa in what is now the Southern province of Zambia. Apart from the South African Missions which joined the Methodist Church of South Africa in 1931 these missions remained under the control of the Primitive Methodist Church until Methodist Union in 1932 when they became part of MMS. Like other churches the Primitive Methodists evangelised, translated the Bible into local languages and included educational, medical and other humanitarian work.

Among those involved in the PM African missions we may note RW Burnett and C.P.Groves in West Africa. Henry Buckenham pioneered in both South and Central Africa and among his colleagues and successors John Smith and George Butt were active in South Africa and William Chapman, Edwin Smith, John Fell and Herbert Gerrard were notable in Central Africa. African converts were involved: William Barleycorn, John Gill and John Petty Sogo were prominent African converts in West Africa. From South Africa Robert Moalosi and Ezekiel Masunyane were long serving African missionaries in Central Africa.

The world is one

Although clearly overseas, the African missions were regarded as part and parcel of the connexion’s overall mission and under the General Mission Committee in England. The Primitive Methodist view of mission was that ‘The world contains but one mission field. For the purposes of administration we may divide Mission into Home and Foreign, but we must not allow ourselves to separate them in thought. The world is one. The needs of any one people do not differ essentially from the needs of all. God’s purpose concerning the whole race is one and the same purpose.’ [5] There is a lot to be said for this view of mission but the logistics of travel and communication in those days made administration from London unwieldy. Mission in Africa required appropriate adaptations to the cultural context and a Primitive Methodist, Edwin W. Smith (1876-1957), was a world leader in understanding the social setting of Christian mission.

The efforts of the people

I was once asked to look into the question of how Primitive Methodists funded their overseas mission. To my surprise it turned out to be a very interesting study. Sir William Hartley and other wealthy people did their bit but I found that most of the funding came from the members who were drawn from the industrial and rural poor. As a learned colleague once told me the PMs funded their world mission ‘from the efforts of the people’.

The Primitive Methodists seldom referred to John Wesley [6] in their missiology but like him they offered the love of Christ to all. Like the very early Primitive Methodists who kept on extending the work they had spiritual and intellectual adventures in working this out for their age. Perhaps there was something about Primitive Methodism that gave them the freedom to explore scholarship and cultures and find fresh ways of conceiving mission and theology.

[5] The Adventure of the Road: Primitive Methodist Missionary Society, 1928, 14.

[6] Edwin Smith’s spiritual guide, however, was Dante Alighieri who composed his Divine Comedy in the light of scripture, human experience and all the knowledge he could acquire.