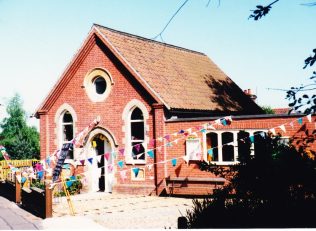 ‘Drayton and Costessey being so near each other, they are to have preaching once a fortnight alternately.’ 1  This decision of the February 1838 Primitive Methodist Quarterly meeting is the first reference to a Methodist society in the village.  At that time it was affiliated to the Rose Yard group of meetings.

In November of that year, the Quarterly meeting ordered that regular open-air preaching was to be held in the village – the usual arrangement when no building was available for use.  This meant that the congregations became victims of the weather and in September 1839 a local preacher, ‘Brother’ Bowthorpe, was exonerated for neglecting an appointment at Drayton on the 30 June as the weather had been so unfavourable.  Nevertheless, these difficult conditions which had prevented Allen Bowthorpe from taking the service did not prevent him from ‘walking from Ringland through Drayton to Norwich in the rain, then stand up in the open air near our Chapel to the ingery [injury] of our cause to make a speech for the Chartists.’ 2

Another local preacher was demoted one place on the plan – a severe punishment as recognition of seniority in preaching was a source of great pride – for neglecting Drayton on 23 June whilst a third was exonerated for failing to turn up on 25 August as he was unwell and unable to find a substitute.

The same meeting reluctantly decided that Drayton should be taken off the plan ‘as we have failed to get a House and believe that there is no probability of ever getting one.’ 3

Another effort was made at Drayton in the spring of 1842 when it was proposed to mission the village, but the venture proved unsuccessful.  A further attempt in 1845 saw Drayton back on the plan and in March 1846 permission was given by the Quarterly meeting to form a Sunday school.

The society failed to fill in a Religious Census form in 1851 and the enumerator did so instead with information he elicited verbally after making the necessary enquiries.  He recorded that a Primitive Methodist chapel had been built in 1848 and that it was used exclusively for worship.  Services were held in the evenings only when an average of 60 people were present.  This chapel was still in existence in the 1890s, but had closed by 1908.