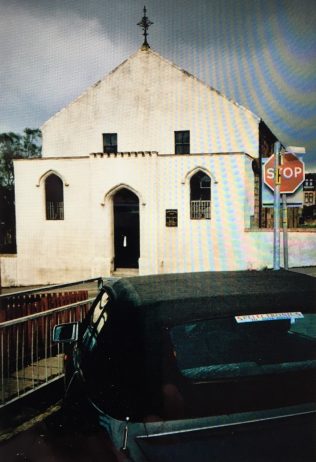 In 1870 the quarterly meeting received a unanimous request for a place of worship from the men of The Excelsior Iron Works at Shieldmuir to allow a ‘Sabbath-School’ to be established. As a result Shieldmuir Church was built and opened in 1872.

When the Wishaw church people moved to their new premises the membership was 85 with approximately 150 attending the services. Population of the area at that time was 13,500. Average attendance at church was 200.

The Rev Walter Stott was minister at the time, when he retired in 1926 he had been the minister for 35 years!

In 1963 there was a week of celebrations to mark the centenary of Wishaw Methodist church.

At Wishaw there were two services on a Sunday (not sure when that went to morning one only). It was a lively family church with Young Wives’ Group, Sisterhood, Men’s Group, Girls Life Brigade (Girls Brigade today), Boys Brigade, Youth Club held on Sundays and Wednesdays and Sunday School and once a month we were able to hold Parade Services. Sunday School went trips in summer, parties were held at Hallowe’en and Christmas. Boys Brigade had great holidays in the summer. We also had a drama group.

Early nineties the church was struggling financially (sounds familiar) and the Cafeteria was introduced to raise funds initially, but soon became apparent that this was a great outreach to the people of the community, people came from a distance and the workers and customers of the local market across the road came for their roll and sausage etc. The cafeteria went with us when the church closed and we moved to join the people of Castlehill in 2005. Falling numbers and ever increasing financial needs, together with the onus of altering the premises to meet the requirements of the Disabled Act of 2004 had made it impossible to continue as we were.

Heavy hearts at the closure soon gave way to joy as a new and larger family was born when we amalgamated with Castlehill and became Netherton Methodist Church as we know it today.

I was baptised in Shieldmuir Methodist Church where my parents were members, when we moved to a brand new house in Coltness we transferred to Wishaw Methodist Church. In transferring to Castlehill I had and still have a great sense of belonging to the body of God’s family and I thank and praise him for that.