A new recruit for the “Aldersgate”. 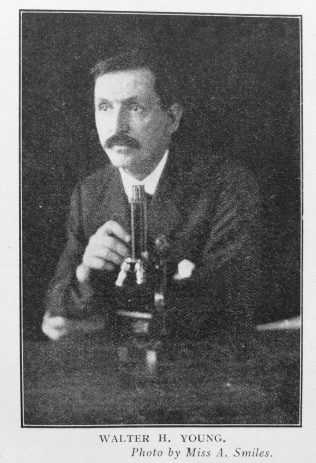 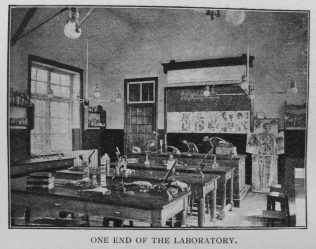 Transcription of article published in the Primitive Methodist Magazine by W.M. Patterson

NEXT year readers of the Aldersgate are to be regaled with swatches (Scottish rendering, please) from the ample natural history stores of Mr. Walter H. Young, of Whitley Bay. Intimation is given thus early, so that those of our young people whose minds run towards botany, biology, geology, and cognate sciences may be made acquainted with the fact that a capable guide has been secured to direct them in heir studies. The articles will also have an interest for other than natural history students, and will be a prominent and valuable feature of the 1912 volume.

Mr. Young was born in Belfast; but that does not count, for he is the son of a travelling preacher, who is a native of the city of Bath, and his mother opened her eyes on this sublunary sphere in London. As in the case of his birth, so all the way through, single incidents do not explain him. Factors and facts have to be grouped and carefully pieced before you get a glimpse of the man. He is full of surprises.

Teaching is his profession; study his recreation. That is to say, his profession provides him with funds to carry out the actual work of his life—study and research. His so-called pastimes, of course, enrich his output to his classes. For nearly twenty years he has taught general and biological science in higher grade and secondary schools in Newcastle and Gateshead; acts as “coach” in biology for London University examinations; was formerly on the staff of the Armstrong College, University of Durham, and a research scholar in marine biology in that university; is a member of nearly all the Natural History Societies in the North of England, and is an ex-president of the Durham County Naturalists’ Union.

About two thousand pupils in science have passed  through his hands, and to-day some are professors, doctors, schoolmasters, naval architects, merchants, etc. There are even operatic vocalists, an international football captain, and an African explorer.

The phenomena of life fascinate him, whether in plant, in animal, or in man. For every expression, for every complexion of that life, he wants to know the wherefore. He fraternises with expert experimenters, and his ear is open to the declarations of the keenest and most capable investigators. But he must know for himself. He has the temper, the patience, the courage of a pure scientist. A lecturer on biological subjects in the northern counties, he has dealt with Mendelism, the crustacea of the North Sea, the marine algae of the North Sea, and other seaside topics; extinct animal forms, flight in insects and birds, and various branches of botany. He has been a contributor of faunistic and botanical notes and illustrations (for he can also handle the pencil and the camera deftly) to the Northumberland County Council’s Sea Fisheries Committee’s “Transactions.”

Keenly alive to all the activities of the workaday world, general literature appeals to him, and he has full scope as one of the censors of the Newcastle Literary and Philosophical Society to gratify his varied tastes. He is the only Primitive Methodist ever elected a member of the Scientific and Lecture Committee of that famous society, which means much.

He reads men. Himself absolutely free from show in any shape, a pretentious pedant, however big a space he may have contrived to fill in the public eye, is to him “the object of his implacable disgust,” whilst a homely, sincere Cullercoats fisherman he regards as a gentleman. He will say a sage thing, and then laugh as lightly as if he had uttered a pleasantry, lest his listener should have a notion that what he had said was worth heeding. Like others of his type, he is terrified that he should be thought to be as good as he is. His love for the Church his venerable father—Rev. James Young—has served with such ability and fidelity for threescore years is only fully known to those few who are most intimately acquainted with him.

Walter was born on 14 November 1864 at Belfast, Antrim, Ireland, to parents James Young, a PM minister, and Charlotte Phillips.