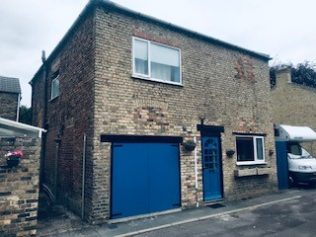 The first Primitive Methodist chapel in Alford was built in a street that is now known as Ranters Row, but unfortunately it is not easy to identify which, if any of the existing buildings it was. Helpfully though, the street falls within the Alford conservation area, and there are building notes. These identify the first chapel as 1 Ranters Row.

The notes remark that ‘the building has been heavily altered’ but that the rear elevation consists in part of a structure of handmade bricks, which is considered to be part of the original fabric.

Quirkily the house now has a sign saying that nothing happened here in September 1782. Primitive Methodist history tells us that it did in 1820 though.