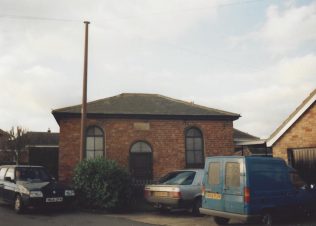 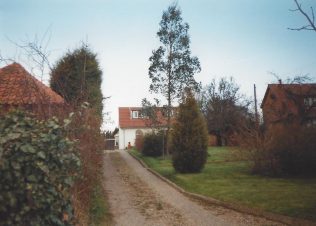 In his collection of photographs of Primitive Methodist chapels, Keith Guyler provides two photographs of chapels in Alvingham. One picture is labelled “Alvingham garage 1848”.  This building is located on Church Lane at the corner of Highbridge Road.  On Google Street View in 2009 it has been converted into a small house, The Old Chapel, with the datestone 2003.

The second is labelled “Alvingham House probably not PM”.  His notes say that this chapel also dates from 1848 and after closure became Chapel House.  The 1974 Ordnance Survy map shows Chapel House on Highbridge Road in a location shown as that of a chapel labelled Free United Methodist on the Ordnance Survey map of 1998.  It is not visible on Google Street View in 2009 because of tree growth – or maybe it is not there any more.

The notes with the photographs are not entirely clear and if you can clarify or confirm that would be helpful.  He dates two chapels – 1836 and 1848.  However the notes linked to the 1836 chapel note its change of use to a garage – which his picture gives as the date of the 1848 chapel. He also says that the 1848 chapel closed in 1925 and became Chapel House which, as above is the date of the United Free Methodist chapel.

A little more clarity comes from the Primitive Methodist magazine of 1837. In it John Coulson reports on his preaching at the opening of Alvingham Primitive Methodist chapel – in 1836. The villages was first  missioned in 1835 by Bro. R North who formed a society.  A year later they opened a chapel measuring 15′(w) x 27′(l).