You are here: HomenextChapelsnextLincolnshirenextI - KnextIrby in the Marsh Primitive Methodist chapel

Wainfleet Road, Irby in the Marsh PE24 5AT 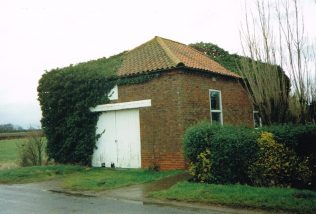 Irby in the Marsh Primitive Methodist chapel dates from 1838 and served for just under 100 years, until 1934. After closure it became a garage/store for a new house.

Jeremiah Gilbert tells us in the Primitive Methodist magazine that the chapel opened on April 1st 1838. Mr Richard Hansley gave the land and a sovereign. He offered to lead 2,000 bricks and 1 chaldron of lime. Six or seven others followed this example all promising a sovereign, to lead bricks or anything else that was wanted. Sister Stamp was one of the opening speakers.

The Primitive Methodist magazine for January 1857 contains an account by Arthur Beanland of the re-opening of Irby chapel on October 26th 1856. By then the chapel was “in a dilatidated state and the society in an abject condition.”  Congregations were very small and class meetings”like angels’ visits, few and far between.”  However, the friends set to and cleaned the chapel, re-plastered the walls, painted and repaired the pews. The society was revived and a Sunday school of thirty scholars established.

On Google Street View in 2009 it has been converted into living accommodation – probably a singe room.