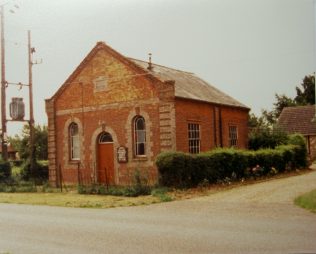 After closure it was converted into a house – The Old Chapel. It was last sold in 1998.

“Barningham, Thetford Circuit.—At this village our people opened a mission, twelve or thirteen years since, and although the good seed sown at that time did not immediately spring up and produce visible fruit on any very extensive scale, it seemed, nevertheless, to have taken root, and we are now constrained to say,” What hath God wrought!”

For several years past the society and congregations have been exceedingly inconvenienced from the want of a suitable place to worship in; and, although repeated attempts have been made to obtain a piece of land for building purposes, all such efforts have, until of late, been fruitless. For the last two or three years, during the spring and summer months, the society has been accustomed to worship in two different barns, kindly lent by a gentleman of whose generosity and kindness we wish to speak in the highest terms, while during the winter we have been compelled to conduct the services in a cottage, and by these means our congregations have from time to time decreased more than fifty per cent.

The recurrence of such disadvantageous circumstances in the future we were determined to prevent, if possible. At length an application being made to a lady who lived at a distance for a site of land, she wrote to say she ” was not inclined to sell a small piece, but would dispose of a whole field containing four acres,” and, in order to ” force the blockade,” the writer, on his own responsibility, accepted it at the price at which it was offered. Now we found ourselves on safe ground, and felt disposed as soon as possible to build.

After preaching one evening, the writer stopped the whole congregation and told them (the thing having till now been kept almost entirely a secret) that if they felt themselves able to carry out the measure they might have a chapel as large as the ” Metropolitan Tabernacle.” This news fell on their car like a thunder-clap, producing very pleasurable sensations, and soon nearly thirty pounds were promised towards carrying out the enterprise.

On Monday, July 28th, the foundation of the temple was laid, when the Rev. Morgan Lloyd (Independent) preached an excellent sermon from the words, “And I, if I be lifted up, will draw all men unto me.” After the sermon, a number of friends laid a brick in the building, accompanied with donations varying from a sovereign to a sixpence, the total of which amounted to £7 10s. 0d. After this a public tea was partaken of by 140 persons, who felt themselves highly delighted with what was going on.

A public meeting was afterwards held, addressed by brothers T. Goodwin (chairman), Frost, Addison, and Alderton, Rev. M. Lloyd, J. Kemish, and the writer. The amount raised as profits of tea and collections amounted to £16, which we think exceedingly good. Many thanks are due to the friends who provided trays gratis, for the tea, who gave liberal donations, and who are trying in other ways to bring this much desired object to a happy issue. May they all share at last in the eternal blessedness awaiting them above the skies, is the prayer of John Allison.”

The opening services of our place of worship here were commenced on Sunday, September 28th, when three sermons were preached by the Rev. W. Thoseby, of Downham. On October 5th, the writer preached afternoon and evening ; and on Monday, the 6th, a tea was provided, at which 130 persons were bountifully sup plied.

The efforts made by the different friends who contributed their quota of help in building this sanctuary, are beyond all praise. The rearing of a chapel in this place was at first felt to be a serious undertaking, as the members of society and friends generally were of the humbler class ; but, happily for us, all our doubts and fears were found to be without cause. The promises made at the beginning of the transaction were most of them well fulfilled, and many of them rendered good more than threefold. The entire cost of the chapel is about £100, towards which £80 have been raised by different means. The cost, however, must have far exceeded this amount had not the farmers and friends in the neighbourhood aided us by carting all the materials gratis.

We would record our thankfulness first to the Author of all good, and then to W. G. Wigg, Esq., (who stood by us so nobly and helped us so handsomely in erecting the chapel at Market Weston,) and Messrs. Baker, Cook, and Brothers, for helping us in this matter ; to Brother Alderton, who gave the greatest part of the timber for the roof; to the kind ladies who contributed the trays free of charge for the tea meeting ; and to the honour able collectors (and they were not a few) whose untiring labours have helped most materially in bringing this matter to so satisfactory a conclusion.

The chapel is built of the best red brick, and covered in with countess slate. It has a commodious rostrum, and is well fitted up with benches. It is secured to the Connexion by a proper deed, and with good management it may be free from debt in a short time. May many sin-enslaved spirits obtain manumission within its sacred enclosures, and hundreds of Zion ‘s travellers from time to time ” pay their constant service there,” is the prayer of J. Allison.”