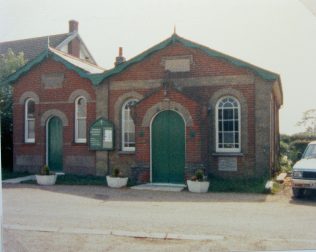 Darsham is south of Halesworth. The Darsham Primitive Methodist chapel in Keith Guyler’s photograph was opened in 1873.  The building on the left was the former Sunday School opened in 1908.  It was still in operation in 1988 and on Google Street View in 2009, but by 2012 it was for sale with planning permission for conversion to a 2 bed-roomed house.

There was a previous chapel opened in  on 11th November 1836. We are told about that by W Pentney in the Primitive Methodist magazine. Opening preachers included Rev W Payne ( Baptist minister), J Thurger and W Pentney himself. The Prims had preached in the village for years before obtaining a plot of land. The  chapel, which measured 18′ wide x  26’long, was  well attended when opened.