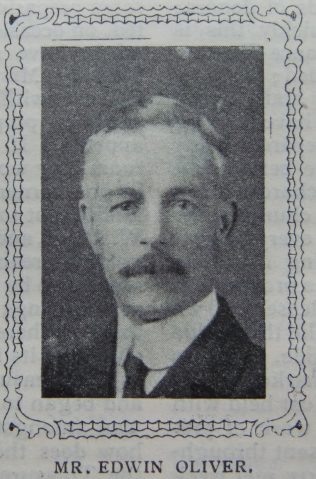 Mr. Edwin Oliver, of Mountsorrel, in the Sileby Station, has held the office of Class leader during the last twenty-four years. His fitness for this high office was recognised early in his Christian career, for he is still a young man. His gifts are those of the quiet, faithful, and persevering Christian worker. To some he may seem to lack enthusiasm, because he is not very demonstrative in worship, but this is not owing to any lack of spiritual feeling and vitality, for his devotion to Christ and the Church is sincere and deep and abiding; and because of his sterling character, and faithfulness, and unwavering attention to duty he is eminently fitted to advise and guide the members of his class. Mr. Oliver is one of those workers, admired by all ministers who know the worth of men of this type, whose affections and energies are almost entirely concentrated upon the life and progress of his own Church. Not that he lacks the wider outlook, for he has held for some years the office of Secretary to the local Free Church Council, but no call from the outside ever causes him to forget the interests of the cause at Montsorrel, or to neglect in the slightest degree its claims upon him. He is also the Junior Circuit Steward of his Station, secretary of the Station Sunday School Committee, and an able and acceptable local preacher. In his own church he is secretary to the Trust, and also to the Sunday school. All these positions he occupies with unquestioned efficiency. His distinctive value as a Class Leader consists in the depth of his piety and warmth of his attachment to his own Church. Class members need not only spiritual stimulus and wise counsels in the weekly meeting, but they need the inspiring and abiding influence of the Leader, whose Christian character is exemplary.

Edwin was born about 1860 at Barrow upon Soar, Leicestershire, to parents George and Elizabeth. George was a stone quarry labourer in 1861 and a plate layer on the railway in 1871.

Edwin died on 10 May 1938 at Mountsorrel, Leicestershire.