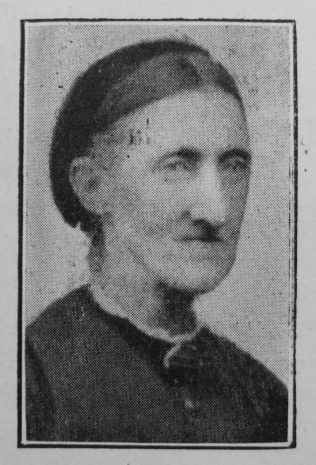 Miss Elizabeth Owens was a Primitive Methodist of the first order. Her uncle, the late John Edwards of Connexional fame, adopted her when she was nine years of age, and such was her character and faithfulness that he provided for her as long as she lived. Her small income was regarded as’a sacred trust, and she was a liberal and systematic supporter of our church.

Kington society, Presteign, has by her death lost a valuable member. Her Christian character and fine Connexional loyalty were evidenced by her regular attendance at the services, and this in spite of defective hearing. The sanctuary was her delight, and she possessed, and could tell, a religious experience. If detained at home the collection did not suffer. She lived quietly in order that she might have the more to give. All the preachers, itinerant and local, have shared her thoughtful and generous hospitality. With care she provided for the servant of the Lord and with joy shared her substance with him. It was her delight to minister, and many a weary “soldier” has found refreshment under her roof. Then how she valued our Connexional literature. Next to her Bible came the ALDERSGATE, of which she read every word month by month. “Have you brought my Conference Minutes?” she asked me soon after I entered the circuit. She could not go to Conference, but she liked to read what they had been doing there, and knew more of the inner working of the Connexion than many prominent officials. She was a quaint little body, playful, methodical, and scrupulous in the cleanliness and order of her home.

I saw her several times during her last illness, and within an hour of her departure, when praying with her, we felt the opening of the heavenly doors.. At half-past nine on Saturday evening, December 29th, 1906, she passed into the presence of the King, aged seventy-two years. The minister and Mr. J. Bounds officiated at the interment, and the former at the memorial service preached from “She hath done what she could.” Ungrudgingly did Miss Owens’ break the alabaster box, the odour of which will abide for many a day.

Elizabeth was baptised on 31 March 1835 at Eardisley, Herefordshire. Her parents were Thomas and Mary.