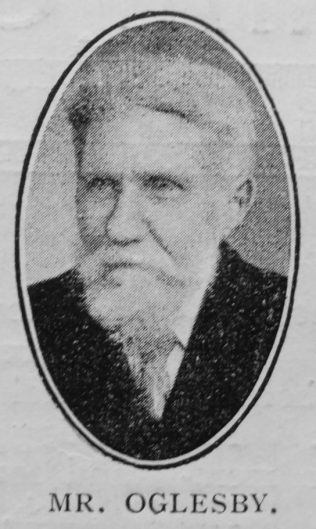 Transcription of obituary published in the Primitive Methodist Magazine by F.G.S.

Through the death of Mr. C. Oglesby our church in Brigg has sustained a great loss, for he was one of its oldest members, and most valued workers. Mr. Oglesby was born in 1838, and very early in life became attached to our Church and Sunday School. He was a member of the same Church for 50 years, and a school teacher and worker 44 years.

His chief work was in the Sunday School, and the great success which our School has realized, and the honourable position it holds to-day, are largely due to his organizing ability and wise leadership. He was for 30 years the superintendent, and greatly beloved by teachers and scholars. He was patient, always punctual, and painstaking, and one of the prized possessions of his old age was a bundle of letters sent by old scholars from many parts of the world, assuring him that his service and advice had not been in vain.

He was one of the pioneers of temperance work in the town, forming a Band of Hope in the School, and assisting in the formation and development of other temperance organizations in the town and district.

The end came somewhat suddenly. Increasing feebleness and bodily infirmity were evidence that he must soon exchange mortality for life. For this change he patiently and hopefully waited. It came on January 25th. He laid down to sleep, and awoke where sickness and sorrow are no more. His remains were laid to rest amidst many manifestations of sorrow, many of the townspeople being present. Previous to the interment a large congregation assembled in the Primitive Methodist Church, where a most impressive service was held, conducted by the Revs. F.G. Starting (Starling) and T.B. Howard. On the following Sunday a large congregation was present, and an “In Memoriam” service was conducted by the Rev. T.B. Howard.

Charles earned his living as a tin plate worker.

He married Mary (abt1838-1873) in the summer of 1859 at Brigg, Lincolnshire. Census returns identify four children.

Note: Charles’ baptism record identifies he was born in 1836, not 1838 as identified in the obituary. Census returns after 1851 identify his place of birth as Brigg.