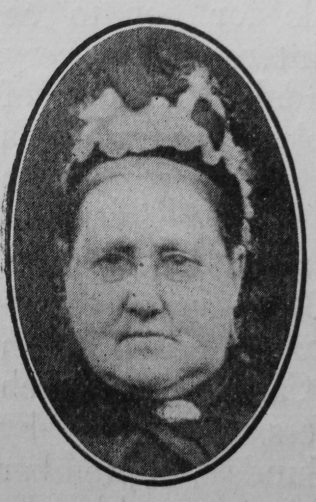 On October 14th, 1907, Mrs. Vickers, wife of Mr. James Vickers, of Stanhope, entered into rest at the age of seventy-one years. In her younger days she was a member of the Wesleyan Church, her parents also being devoted members of that Church, but on her marriage in November, 1859, she became a consistent and ardent member of our Church and remained such to, the end.

Our sister was always an earnest and industrious worker and ever associated herself with every movement in the Church for the furtherance of God’s Kingdom. Her devoted loyalty to Christ and Church will be an object of reverence.

It was one of her chief desires, as also of her husband, to see their family of two sons and two daughters brought to God, which desire was grandly realized. Some of the family have and do hold honorable positions in our Church.

Mrs. Vickers was a good wife and mother, reminding us of the words, “The heart of her husband doth safely trust in her.” “Her children arise up and call her blessed.” The funeral was conducted by the Rev. C. Roberts and very many friends attended to pay their respect to one whom they loved.