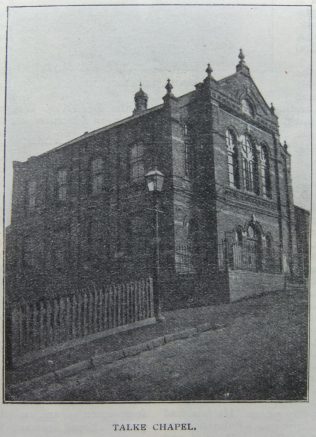 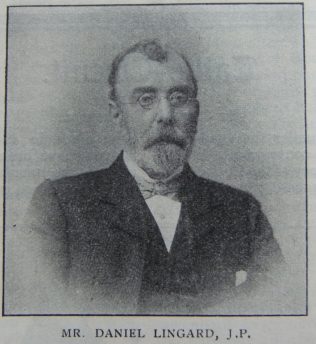 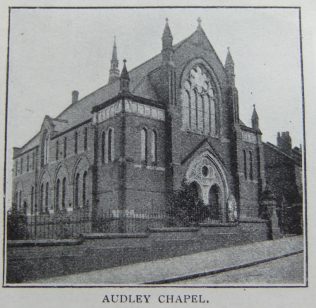 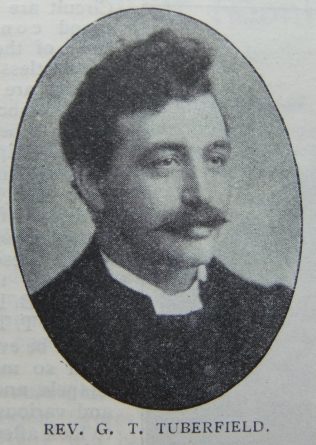 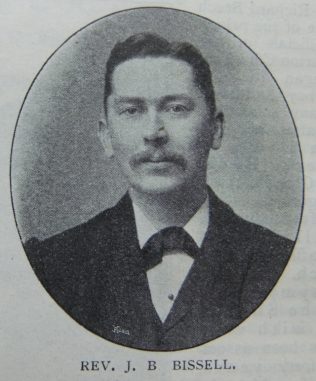 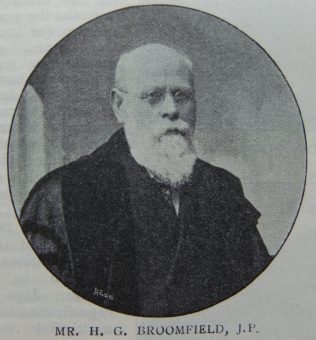 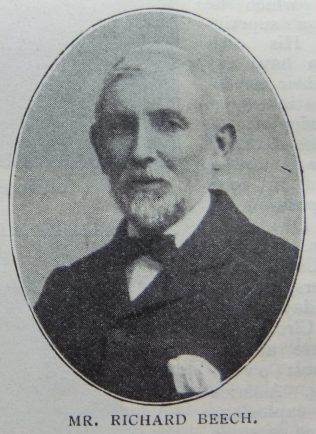 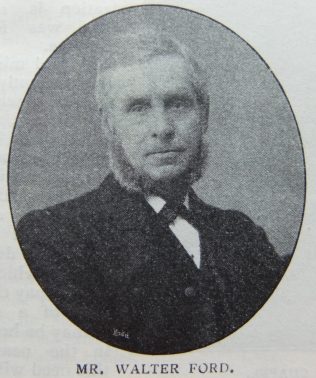 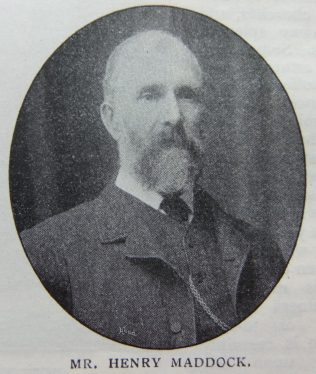 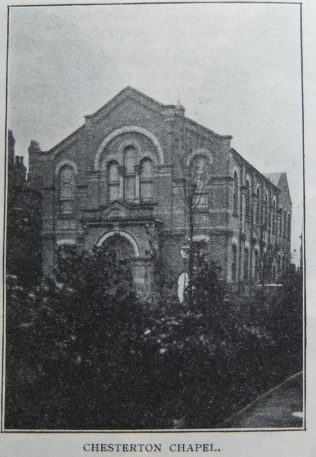 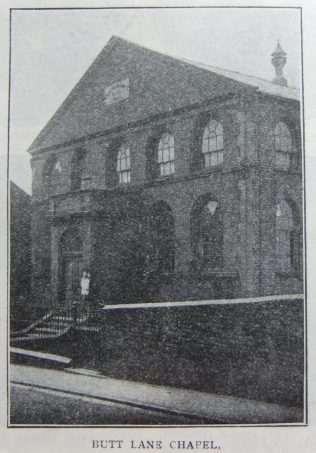 Transcription of Article in the Christian Messenger by Rev. J.B. Bissell

Talke Circuit lies under the shadow of Mow Cop, and is consequently linked with the early history of the Connexion. Every bit of it is sacred ground, for it has been trodden by the feet of the Fathers. Relics and reminders are everywhere. Here in our Talke Circuit are three rugged seats which were made by Hugh Bourne himself, and brought over from Harriseahead. In Talke Churchyard Thomas Alcock, a close friend of Hugh Bourne’s is sleeping. At Englesea Brook, Hugh Bourne, James Bourne and Thomas Russell rest from their labours. In the same village there also reside the nieces and nephews of James Bourne. The old past survives very significantly in actual names. Hugh Bourne, for instance, is one of the stewards of our Chesterton Society. He was born exactly 99 years after the Founder, on the same day of the week, the same date of the same month, and like him was the fifth child of the family.

The Circuit was formed from Tunstall in 1870, with the Rev. Peter Aston as its first superintendent. Since that day progress has been made in every direction. Seven new chapels have been erected, two manses purchased, the membership nearly doubled, and the organization considerably multiplied. We now have 12 chapels, 590 members, 2,335 Sunday School scholars, and trust estates valued at £20,500.

This has been called “a country Circuit with town chapels.” The description is by no means inappropriate. Some of the chapels would do credit to any town or city.

Talke Chapel, built in 1876, under the direction of the Rev. George Jones, is a very fine building, with an imposing front, and with seating accommodation for 500 people. A school, two cottages and a manse are included in the Trust estate, the whole of which is valued at £3,400.

Chesterton Chapel was built in 1872, during the superintendency of the Rev. Peter Aston. It is situated in the main street, in a commanding position, and will seat 500 people. The internal arrangements are excellent, and the orchestra is graced by a beautiful organ, the gift of the late Mr. George Smith. The Trust estate is valued at £2,500.

Butt Lane Chapel was built in 1869. It seats 420 people. The School is built underneath the Chapel, and the whole structure presents a very imposing appearance.

Audley Chapel, built in  1897, during the superintendency of the Rev. W. Lawrence, is a very fine structure. It cost over £3,000, seats 700 people, and has a society of 180 members. It has been called the finest village church in primitive Methodism. Among its many institutions is a fine brass band which is wholly consecrated to mission work, every one of its members being a member of the church. The whole of the Trust estate is valued at £4,760.

The other chapels in the Circuit are Englesea Brook, Kidsgrove, Alsager, Wood Lane, Balls Bank, Mill End and Miles Green.

The strength of the Circuit is very largely due to the loyalty and devotedness of its leading officials. It has had some dark days, but these men have never wavered. Toil, time and money have been given unstintingly. It is a pleasure just to name some of the oldest.

Mr. Walter Ford has been the senior Circuit Steward for twenty-nine years. In his twenty-fifth year of office he received from the Quarterly Meeting a beautifully-framed address expressive of the great esteem in which he is held. He has been a local preacher fifty-three years, a class-leader twenty years, and a teacher and school superintendent over fifty years. He has had the honour of attending two Conferences as representative of the Tunstall District, and was one of the appointed preachers at the Centenary Camp Meeting at Mow Cop. He is highly esteemed by his fellow-townsmen, whose municipal interests he has long served as a Councillor.

Mr. Daniel Lingard is a well-known figure in the courts of the Connexion. He possesses the Connexional spirit in a very high degree. He is a staunch friend of ministers. He loves his church and is one of its most generous supporters. He became a member in 1858. He was choir-master and organist from 1862-1888. He has been a class-leader twenty-seven years, and school superintendent twenty-five years. He has the confidence and esteem of the whole Circuit.

Mr. Hy. G. Broomfield, J.P. (who died while this article was being written) was the first Circuit Steward of the Circuit. He was a local preacher on the Tunstall plan before the Talke Circuit was formed, and it is interesting to note that his number was 112. He was converted at Bradley Green during a mission conducted by the Rev. Wm. Wright. Prior to this he had been a lecturer on the Temperance and other kindred subjects. He was a generous supporter of his church, held the District office of Orphanage Treasurer, and was Chairman of the last Orphanage Anniversary at Alresford, giving a handsome donation. He took a great interest in civic life, and filled many of its offices, having been a Councillor, a member of the Board of Guardians, a member of the Cheshire Education Committee and a Justice of the Peace.

Mr. Hy. Maddock has been a member forty-seven years, a class-leader forty-five years, chapel steward forty-one years, and society steward forty years. This ia truly a remarkable record of service. He is held in much esteem by his own church at Audley, where for so many years he has exercised a very gracious influence.

Mr. Richard Beech is one of the principal officials of our Chesterton Church. He began life as a farm boy, and never had any schooling. But after his conversion in 1859 at Butler’s Bank, Prees Green Circuit, he began to apply himself to study. He has filled almost every office in the church. He has large sympathies with the Sunday school, with which he has been associated forty years, and of which he is now a superintendent. His own townsmen have expressed their esteem for him in many ways, having elected him to the Board of Guardians in 1901, and in 1906 to the position of Urban District Councillor.

This Circuit, like many others, has had its dark days. The Trust and Circuit liabilities were at one time almost overwhelming. A series of colliery explosions made havoc of some of our churches, and took away splendid officials. Some of the Trust estates have suffered from subsidences caused by the mines. Talke Pitts Chapel, an imposing structure, and reared at a cost of much sacrifice, was utterly wrecked in this way five years ago.

But while there have been dark days, there is much for thankfulness in the outlook of to-day. The sun is certainly shining upon us. The finances of the Circuit are in very sound condition. Four of the chapels are debtless, and the others are in easy circumstances. We report the largest membership of the Tunstall District, and have the largest number of Sunday school scholars.

The present ministers are the Rev. Joseph B. Bissell and George T. Tuberfield. It will be evident that with so many large chapels, and so many and various interests to look after, it is im(possible) for two ministers to overtake the work, or give to the societies the careful supervision they require. Naturally, however the Circuit is desirous of making sure of its ground before becoming responsible for further ministerial agency. In earlier days it was possible to work large Circuits with one or two ministers: but the entire conditions have changed in these modern days. Our organization has been multiplied fourfold, and far more concentration is required than was formerly the case.

A third minister is very urgently needed to adequately work the Circuit, and the matter has been for some time under the earnest consideration of the officials. There are churches that might be considerably developed, some of which would even repay the whole time of a minister. It may be hoped that in the near future this need will be supplied.

Transcriber’s note: Reference to the PM Minutes of Conference in the years following the publication of the article reveals that the plea in the last paragraph for additional ministerial resource was not successful.